We visit Rutland Water 2 or 3 times a year. I wish it could be more, but they don't permit dogs, so we have to find someone to look after Poppy each time.

Although we visit often, almost every time we get lost on the journey. There is one particular turn off the A1 that we take, when we should ignore it and wait for the next one. You would think we would have learned by now! Because of this detour, it normally takes us around 45 minutes to arrive at our starting point, The Anglian Water Birdwatching Centre at Egleton.

Walking around the reservoir in its entirety would entail just over 22 miles, too much for us at our age! However, we stick to the Nature Reserve at the western end, unless we are visiting specifically to see the Ospreys during their breeding season. I will come back to these magnificent birds of prey in a while.

But first I want to tell you about a particular day we spent at Rutland Water in the company of 4 other photographers.

In February 2018 a Facebook Group I belong to arranged a trip to Rutland Water. Along with me were four other photographers - though not all specialized in wildlife photography.

We started at the viewing gallery above the visitor centre as it was raining outside. This overlooks Lagoon 1, separated from the South Arm of the reservoir by Brown's Island. 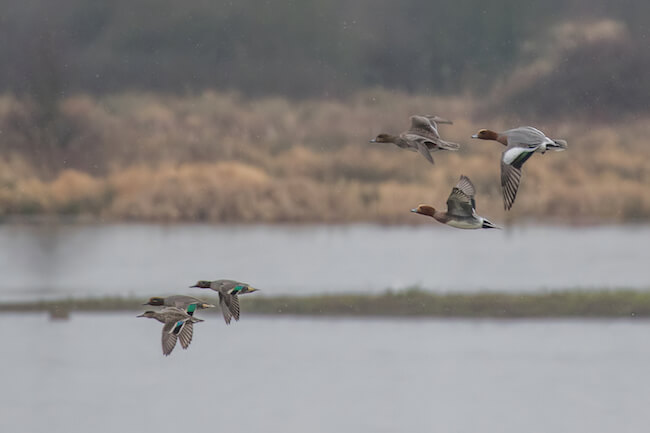 Over 25,000 waterfowl overwinter on the reserve, and there were several here. Most were too far away for wonderful photos, so I resorted to waiting for closer flypasts. Because of the weather, the birds stood out sharply against the murky background. 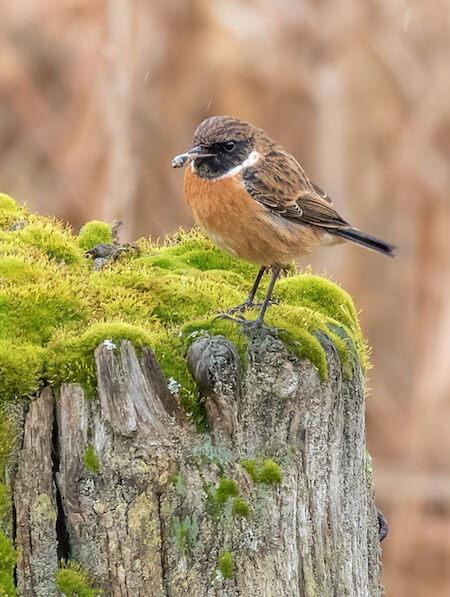 After a while movement caught my eye in the foreground, and I studied the reeds intently. I soon spotted a little Stonechat busy catching his breakfast and taking it back to a tree stump to eat it. Obligingly, he chose a stump with an attractive covering of moss.

Nature being nature, a while later we spotted a stoat heading towards the reeds. Within minutes it raced back, holding a small bird in its mouth! We continued to see a Stonechat, so it seems he had a narrow escape.

A murmur of voices from inside the gallery told me a member of the group had seen a Water Rail. Having never seen one before, I searched the edge of the water for the elusive bird. With directions from my neighbouring photographer, I eventually found it and managed a quick record photo, good enough to see what it was, but not good enough to share, sorry.

Gradually the rain eased, and we all headed out towards the other three lagoons in this section of the reserve. It was still grey, with little light for photography, but we were keen to see what else was about.

We stopped at the Redshank, Grebe and Osprey hides, overlooking Lagoon 2, but we saw little from these. So we headed for the larger Lagoon 4 and the three hides there.

From the Sandpiper hide, we soon saw a Grey Heron lurking in the reeds at the edge of the water. He never revealed himself while we were there, although one of the other ladies got a nice photo of him just after we left. That is always the way with birdwatching!

While we were in one hide, Mel Parsons, one of the group members, took a photo of me with my 100-400mm lens, which you can see on the about me page of the site. 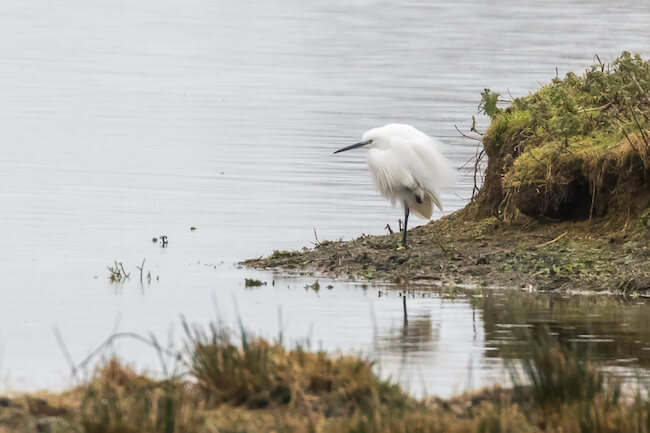 Shortly after, we spotted a Little Egret, with its feathers all fluffed up against the cold. As still as a statue, only moving when he saw a fish, he kept us entertained until we moved on to Dunlin hide.

Later I learned from the other ladies that there was also a Great White Egret on this lagoon while we were watching. This would have been a new bird to me, however, I have seen many since this trip to Rutland Water. 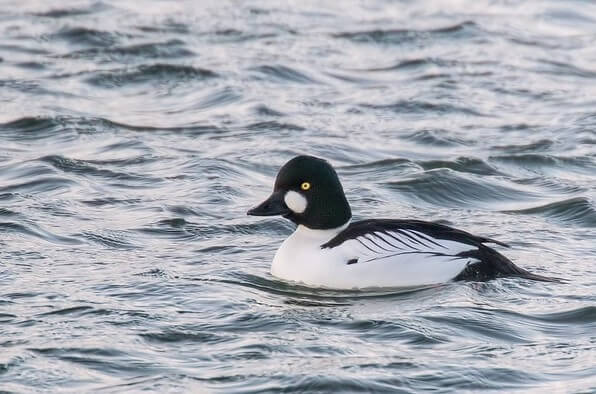 The "normal suspects" of Mallard, Wigeon, Tufted Duck, Mute Swan, Greylag Geese, Coot and  Great Crested Grebe were out on the water, along with a solitary male Goldeneye.

On a little spit of land just beyond the shoreline there was a Carrion Crow feasting on a fish, being watched by a lone Lapwing and a pair of Shoveler ducks.

"There are two redheads out on the far side" stated the other occupant of the hide. This term refers to female ducks from several species, so I asked him to confirm what he had spotted. "Smew!" came the answer. He kindly allowed me to look through his spotting scope at the ducks, as they were too far away for the naked eye to pick out. Although I couldn't photograph them, it was lovely to add them to my list of birds seen in 2018.

These beautiful birds only visit the UK in small numbers, mainly just in the East and South-East regions so it is a special moment when we see one. As with many birds, it is the male that is the most attractive, mostly white with thin black lines reminiscent of cracked porcelain, and we later learned there was one on the reserve that day, although it failed to show for us.

After visiting the hides, we headed back to the Birdwatching Center and spent a few minutes checking out the feeding area. The ground below the feeders was busy with Pheasants and Moorhen besides the normal small garden birds that were tucking in to the free food on offer.

It was nearing 2pm before we said our goodbyes to the rest of the group and headed home after an enjoyable, if cold and damp, visit to Rutland Water.

While you are here, you might like to check out our experience of taking one of Rutland Water's Osprey Cruises.