The osprey cruises at Rutland Water are one of the highlights of our birding year. A trip aboard the Rutland Belle presents the opportunity of seeing these splendid birds of prey fishing in the deep water of the reservoir.

I know the site is about nature WALKS but I felt I couldn't talk about Rutland Water Nature Reserve without also including our experience of these osprey boat tours.

It is a privilege to be able to see ospreys so close to home. There was a time when they had all but been wiped out in the UK, with just a few remaining in Scotland. Even there, they hadn't bred since 1916 until birds from Scandinavia recolonised in 1954.

So, what lead to their return to Rutland Water?

Maya (female) and 33 (male) Osprey on the Manton Bay platform

Local people noticed that not long after the reservoir was constructed in the 1970s, ospreys were flying over when migrating from Scotland to Africa. I can only imagine their delight when they discovered some were dropping in for a "pit stop".

However, it wasn't until 1994 that the first female osprey spent the summer on the reserve.

This lead to Roy Denis, a leading expert on the species from the Highland Foundation for Wildlife, together with Rutland's Reserve manager, Tim Appleton, to come up with the idea of translocating ospreys from Scotland. Their first step was to build nest platforms to encourage the birds to breed in the area.

Further plans were then made, but as with many conservation efforts, there was a lot of planning and red tape to get through before a full-scale attempt to reintroduce the birds could go ahead. The natural inclination for ospreys to head back to their own nest site to breed also had to be considered.

Two years later, in 1996, a group of Scottish chicks were moved to Rutland where they were carefully reared with as little human contact as possible. After their release, they headed to warmer climes, leaving the conservationists with their fingers crossed, hoping that they would return.

Since then, with another group of female Scottish chicks added to the mix in 2005 to boost numbers, the ospreys have bred regularly at Rutland Water.

Hides are positioned, at a distance so that the public can see the birds throughout the breeding season. Seeing a parent bring in a large fish for the nestlings is a thrill. But watching them catch those fish is a different experience altogether!

As Rutland Water is so vast, watching from the shore hoping to see these majestic birds of prey catching fish you stand little chance of success.

To bring the public to the birds, the Leicestershire and Rutland Wildlife Trust arrange osprey cruises aboard the Rutland Belle from April to October.

You can opt for a dawn or evening cruise. We prefer the early morning trips, but this involves getting out of the house by 4.30am, to reach Whitwell on the North shore of the reserve before 6.00am.

My husband treated me to one such trip in July 2017 as a birthday present. The wildlife spotting began before we even arrived at Rutland. A brown hare raced alongside the car for the length of a field as we headed to the reserve. We also saw other birds of prey on route, namely buzzards and red kites.

As a beginner photographer, I had a Canon 7D mk ii DSLR camera with me, along with a Sigma 70-200mm lens. In hindsight, I discovered that a longer lens was really necessary in order to get the bird big enough in the frame. Cropping on the computer is possible, but you can't add detail where none exists, resulting in pictures that are best not printed on a large scale, unless you have a camera that takes high resolution photographs. 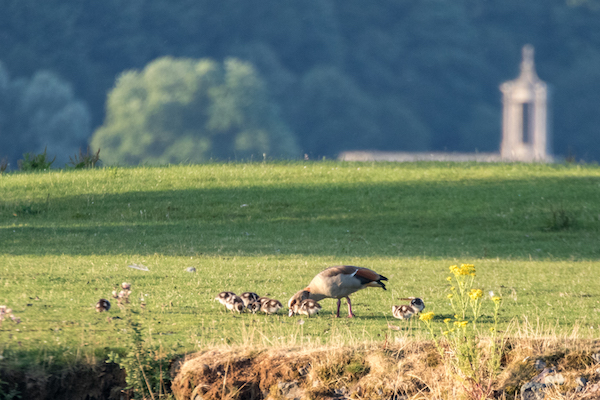 After boarding the boat and waiting to move off, we sat and watched swifts dart around at breakneck speed, just above the water surface. These long-winged birds were catching insects for their breakfast, something we were going to have to wait to enjoy until after the cruise. I tried to photograph the swifts, but they were just too fast!

By the shore, we spied a pair of Egyptian geese with a large brood of goslings, and I couldn't resist capturing some photos. In the distance behind the geese we could just see the top of a church (more on that in a moment).

The osprey cruises last around one-and-one-half hours, which gives plenty of opportunity to capture a glimpse of an Osprey heading off to fish for its breakfast. If ospreys have young, they have to undertake more fishing trips, so there are more chances of seeing one. 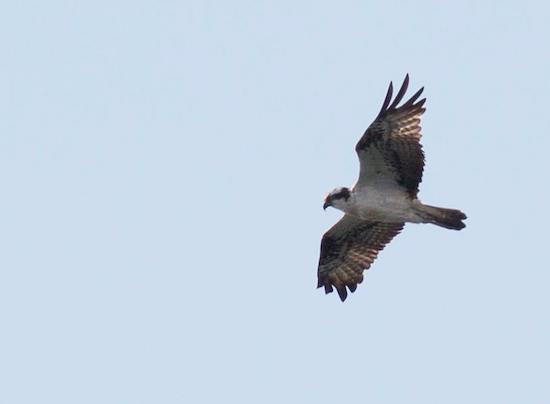 During our cruise, we were lucky enough to have six fantastic sightings! The ospreys flew close enough to see with the naked eye, but as on our previous osprey cruises, not close enough to get great photos with the equipment I owned back then. An issue that my husband kindly resolved as an extra birthday gift a few days later!

Besides the ospreys, we saw other birds while on the reservoir. These included cormorants, common terns, tufted ducks, great crested grebes, Canada geese, and many gulls.

Upon our return to shore, we returned to the car and drove to a rendezvous point where the smell of frying bacon guided us to a delicious cooked breakfast to round off our experience. 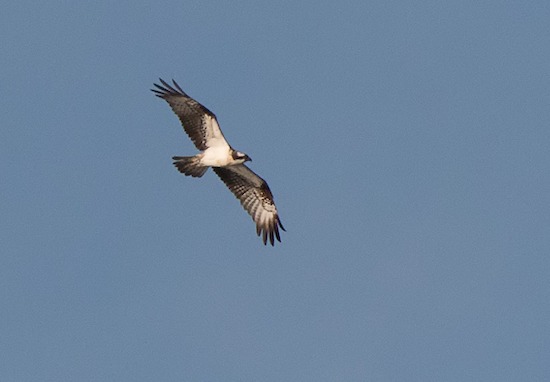 I mentioned this landmark in passing earlier and promised to come back to it. At first sight, the church appears either to float on the water or to have fallen through the ground underneath it! At dawn, from the boat, it is a surreal sight indeed. 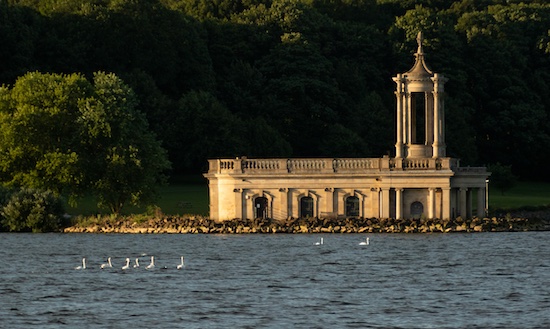 In fact, it is partially submerged and surrounded by an embankment covered in boulders that act to protect it from the water. Access is by a causeway that reaches out from the shore.

The church narrowly missed being demolished when the reservoir was created. A public outcry saved the building, and they raised the floor inside the church to around half a metre above the water level.

Although the church was deconsecrated, it is still used today as an unusual fairytale wedding venue. It also serves as a museum to the area, containing fossils of dinosaurs and an Anglo-Saxon skeleton.

The wildlife on the reserve does not seem to mind having a church as part of the surroundings. In fact, we often see the waterfowl and swans resting on the boulders surrounding it. From there, they calmly watch the Rutland Belle taking human visitors on osprey cruises throughout the season.

I wrote about another cruise on my page about Flamborough Head, although this one was at sea.