The area around Flamborough Head has a rugged beauty which I can't resist. I wrote about my first visit to Bempton Cliffs in early June 2017, and couldn't wait to get back again. I left it till later in the month this time, hoping to see chicks in the nests and a larger number of puffins, both of which proved to be the case.

We spent a long weekend in Yorkshire, going up to Bempton Cliffs on the Friday and out on the Yorkshire Belle on the Saturday followed by a walk through the woodland at Dane's Dyke down to the beach, then a drive up to the North Landing and South Landing beaches at Flamborough Head to see the lighthouse. A short trip back to Bempton on the Sunday morning before heading home, completed our visit. 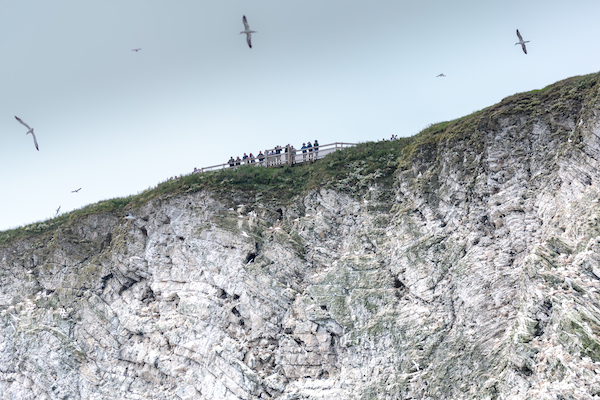 Viewpoint atop the cliffs

I had upgraded my gear since our last trip. I took with me my Canon 5d mk iii full frame camera and the second generation 100-400mm L lens, as well as my 7D mk2. I then had the dilemma of which body to use, as they each had advantages.

The crop factor of the 7d mk2 body effectively gave me more reach and it had a faster frame rate of 10fps, but the full frame quality of the 5D mkiii made that the camera of choice for most of the trip. When necessary, I added the 1.4x extender to the lens to zoom in on the birds.

Both cameras have a very similar focusing system and the buttons are in the same position making it easy to swap from one to the other.

I also took with me my heavy Vanguard tripod and Gimbal head, a decision I was thankful for considering the strength of the sea winds on the first day! Who would have thought I would need my thick camo jacket and fingerless gloves in June? This extra clothing didn't stop my teeth from chattering or my eyes from watering though!

All the usual suspects were nesting on the cliffs - Puffin, Gannets, Kittiwake, Fulmar, Guillemot and Razorbills. We also spotted Herring Gulls and feral Rock Doves, along with numerous Jackdaw.

The peace and quiet is shattered as you near the cliff edge, as the sound of thousands of birds carries on the wind. Defending their territories from noisy neighbours or welcoming their life-long partners back from fishing trips are noisy affairs!

I have put together a little gallery below, showing some of my favourite images of these magnificent seabirds. 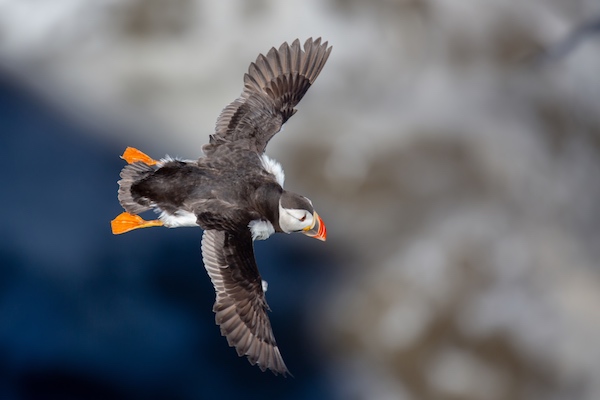 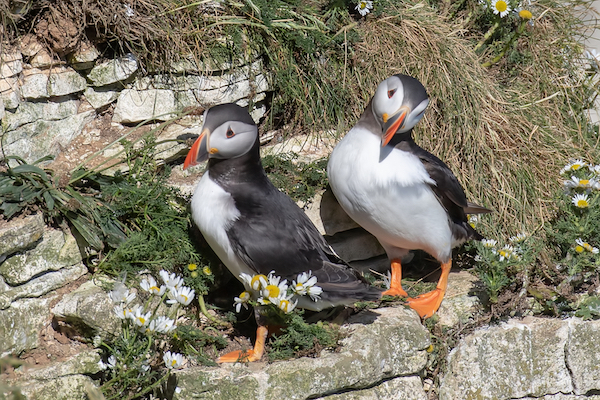 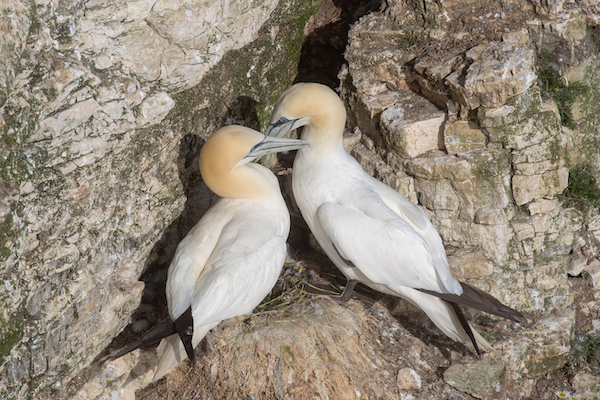 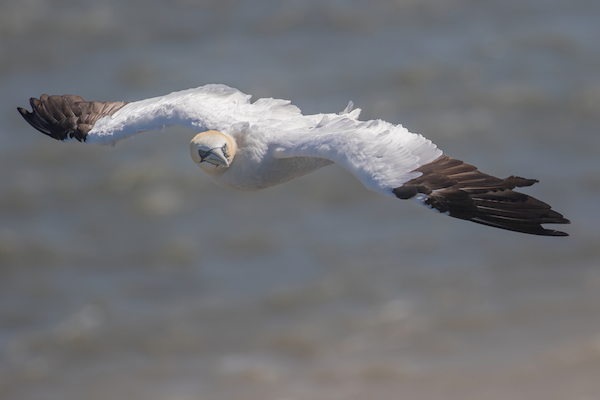 Flying adult gannet with feathers ruffled by the wind 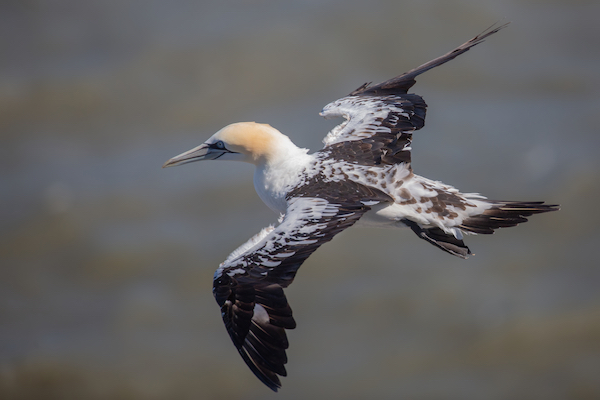 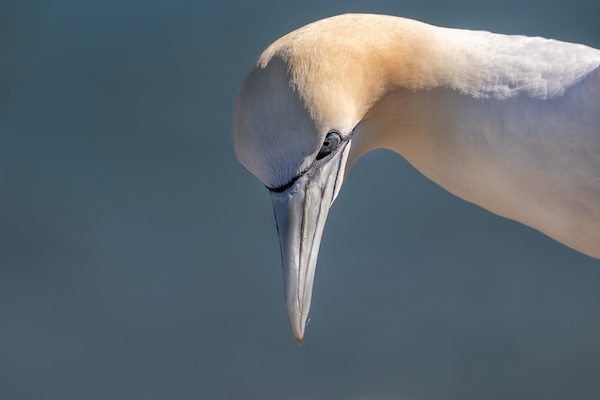 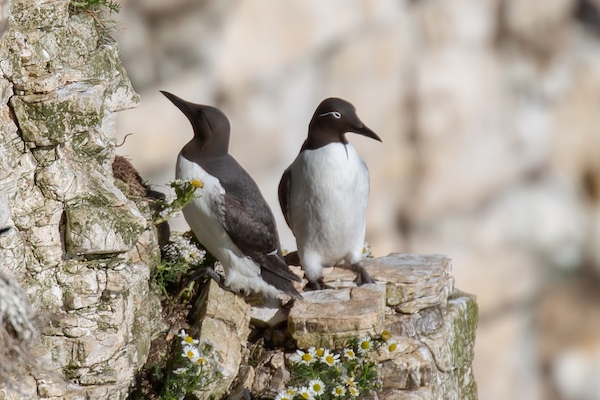 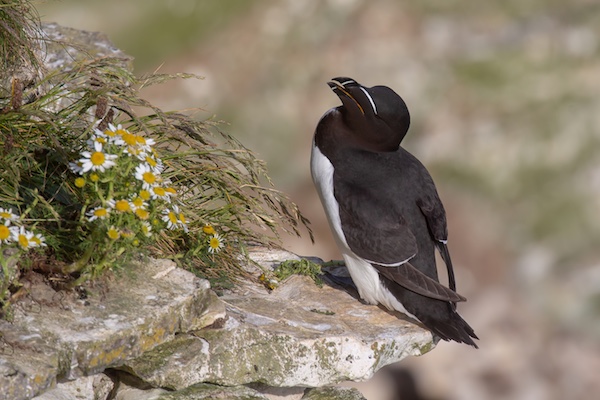 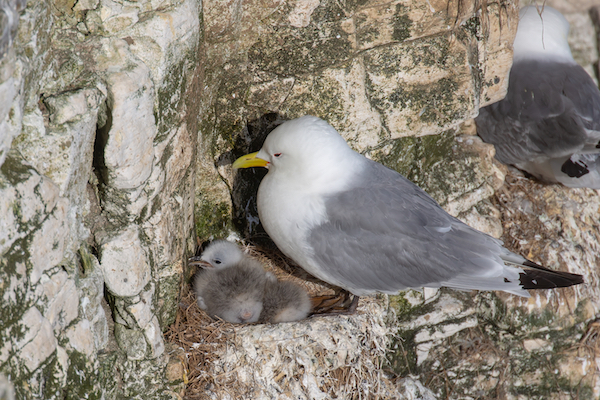 Kittiwake chicks in the nest 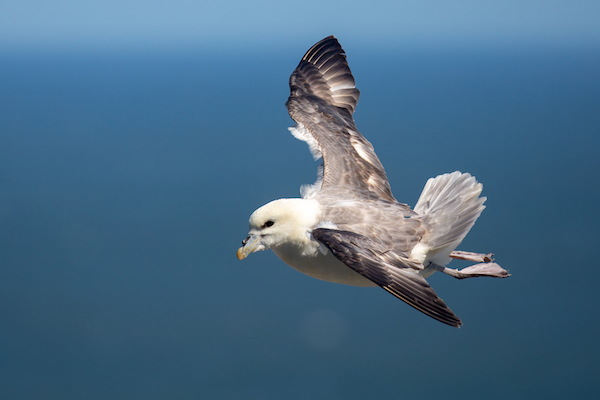 RSPB Bempton Cliffs offers 5 viewing platforms with a walk of approximately 40 minutes from Jubilee Corner on the left to Staple Newk on the right. Each provides a different angle on the cliffs. There are also good vantage points along the footpath between the platforms.

We began at Staple Newk and worked our way back along the cliffs. heading away from Flamborough Head, keeping the rising sun behind us. The only problem with this plan was the wind! It was blowing a gale straight into our faces. Brrr it was COLD!

Despite the discomfort the weather did have the photographic advantage that the birds were struggling to fly against it, effectively slowing them down and making flight shots less difficult.

Note I did not say easy! Catching a puffin, at less than 30cm long, in mid air is never simple. Did you know that in normal flight their wings beat 400 times per minute? The wind caused them to hover more than flap, which certainly increased my chances of getting sharp shots. I set the camera to TV (or shutter speed) mode and a speed of 1/1250 sec which along with Auto ISO enabled me to stop the action while maintaining a satisfactory aperture.  By the end of the day I had taken over 1000 photographs, most of which I was very happy with.

As the day progressed the wind dropped and things heated up considerably. When we arrived back at the car I was pleased that I had popped a sleeveless vest top in the car to change into.

Trip on the Yorkshire Belle to Flamborough Head 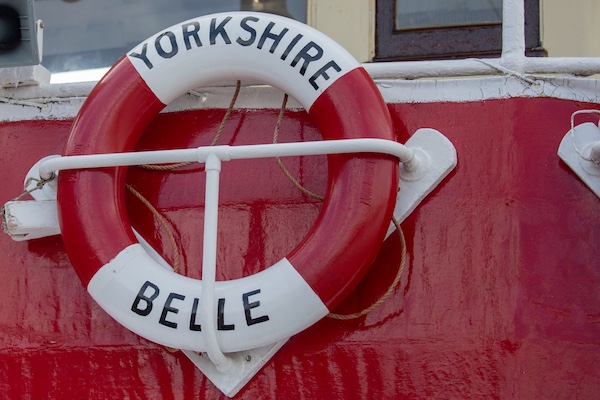 When we arrived back at the hotel on Friday evening there was an e-mail waiting for us.

"Due to the swell", it said, "although we are still running the Puffin Cruise along to Flamborough Head we understand that you may have changed your mind about the boat trip, especially if you get seasick. If you don't turn up we will refund you."

As Saturday dawned bright and with only a gentle breeze in Bridlington Harbour, we weren't going to let the warning put us off. A decision we came to regret by lunchtime as around the headland it got very "choppy" with the boat rolling from side to side making me feel rather sick.

If I had found photographing flying birds from dry land tricky, adding in a rapidly moving boat to the equation only helped to increase the difficulty! Luckily there were thousands of Guillemot and Razorbill on the ocean for me to practice on. 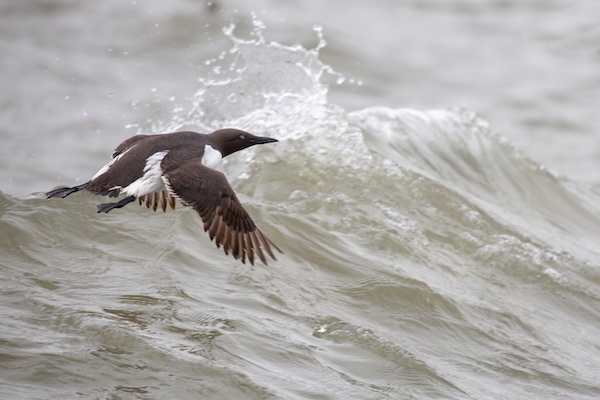 Guillemot above the rolling waves

A hop, skip and in flight!

The 71-year-old Yorkshire Belle was a fairly large boat with 3 tiers of seats in the prow meaning that you could only see the sea on one side. I had positioned myself on the left (or port) side so that we could view the cliffs on our way out to sea. Although this worked for the bird photography it meant I missed the sighting of a porpoise on the starboard side, sadly. Also disappointing was that due to the weather we didn't make it all the way to Flamborough Head, the skipper wisely deciding not to risk it.

Once we turned around and headed back to harbour I was on the correct side to glimpse a pair of Manx Shearwater heading out to sea. By the time I realized what they were it was too late to take a photo. An opportunity missed but maybe I will have better luck next time.

The boat kept away from the edge of the cliffs to avoid the rafts of floating birds. Something that could not be said of a pair of jet skiers who ploughed straight through them scattering birds in all directions. The RSPB staff on board the Yorkshire Belle were rightly angry, explaining that this was against the rules during the breeding season. 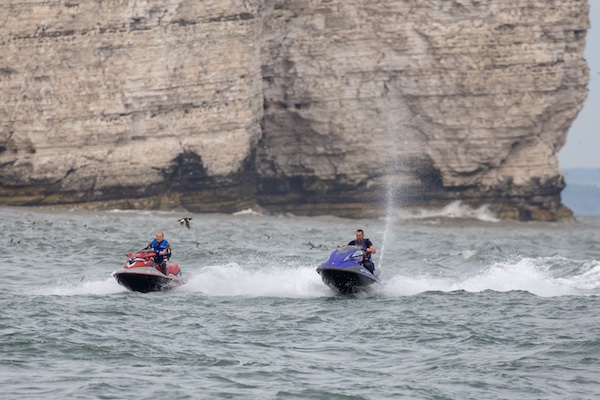 Although I enjoyed the boat trip to Flamborough Head I wasn't sorry when we turned around and set course to Bridlington. As we neared our destination the sea calmed down and it was a more gentle ride back, thank goodness.

It isn't just sea birds that make their home in the East Riding of Yorkshire.

We were lucky enough to visit Bempton Cliffs as a family of Swallows fledged (a term used when baby birds leave the nest for the first time). We counted four in total, with one fledging on the Friday and the rest by the time we returned on Sunday morning. They perched on the fence and bushes around the visitor centre car park, while the parents were kept busy catching insects to feed their hungry brood. 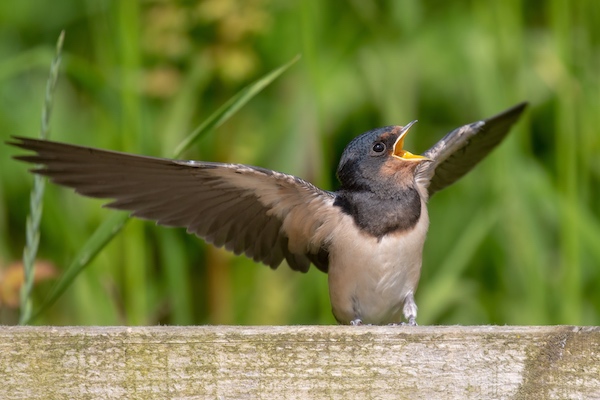 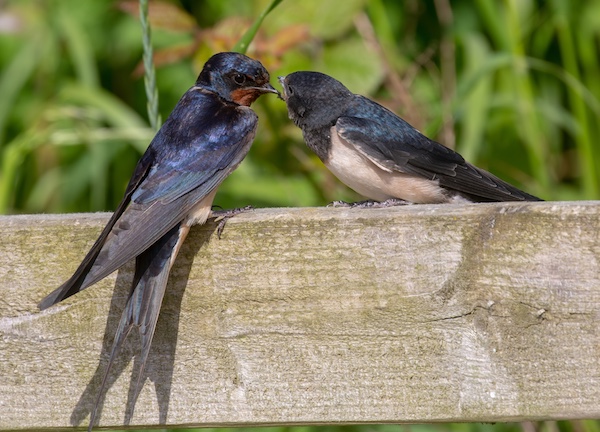 I also kept my eyes open for the little Tree Sparrows with their chestnut caps and white cheeks with black spots. Their numbers have declined since the 1970s and are now classed as having a Red Status by the RSPB. Eventually, we did track down a little group of them, again near the Visitor Centre at Bempton.  I was able to take a portrait of this little fella, although it could be a lass, as both sexes look alike. 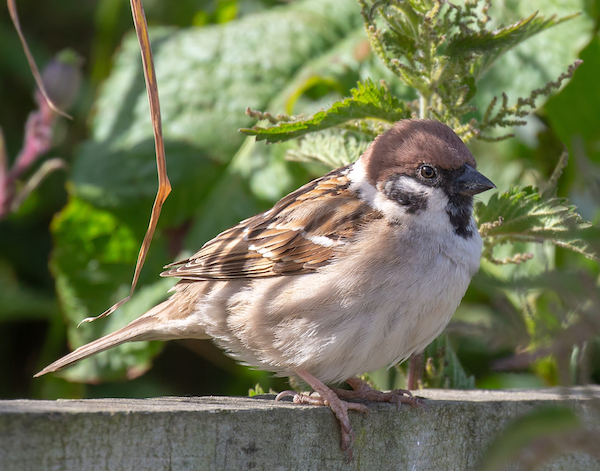 Just after hubby mentioned the possibility of Linnets in the area, I spotted this attractive male sitting atop a hedge. He posed for my camera before flying off.

The numerous Skylarks on the other hand didn't stay still long enough but gave a fantastic performance as they rose into the air uttering high-pitched chirrups. 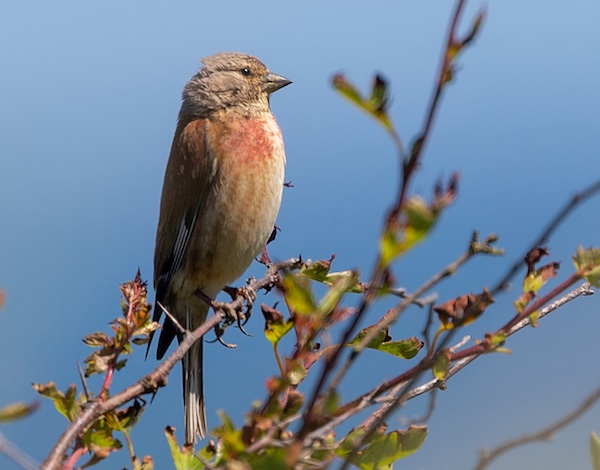 We also had glimpses of short eared owls, but sadly no photographs. You can see photos of these wonderful birds on my page about Nene Washes in Cambridgeshire though.

From tiny Tree Sparrows to the huge Gannets the birds of Bempton Cliffs and Flamborough Head were a delight to see once again. I am sure this won't be my last trip to the area.