A crisp, winter sunrise and a beautiful location - what a wonderful way to start a Sunday morning photo walk!

Leaving a nice cosy bed at 5.30am and scraping ice off the car windscreen may not be everyone's idea of early morning fun. But for me the opportunity for stunning nature photography was worth it, although my husband wasn't so keen.

After an "interesting" forty five minute drive, along frosty, narrow roads, we neared our destination - RSPB Nene Washes in Cambridgeshire.

The sun peeped above the horizon, spreading a beautiful golden light over the flat landscape. Hoping the winter sunrise would last, we rose over a humpback bridge to see the glorious vista open out below us. It took my breath away!

Despite being bundled up in multiple layers,  my fingers were so cold it was hard to control the camera. However, my husband said a wide smile spread across my face as we started our walk. The photograph below, taken with a long zoom lens, gives an impression of a small portion of what lay in front of us. 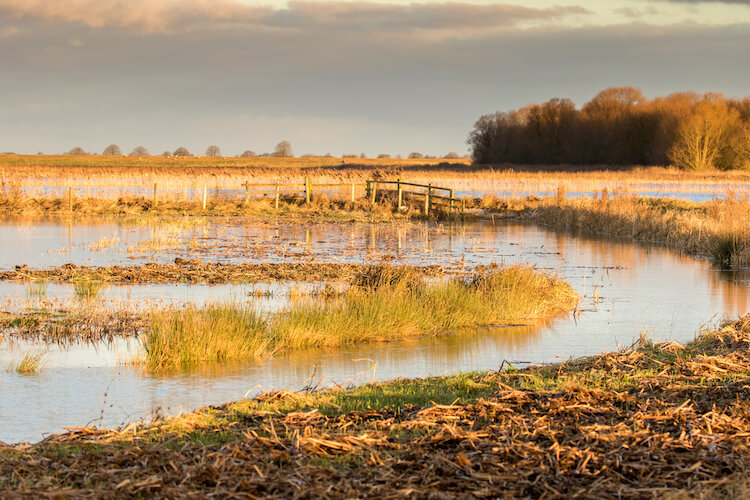 Winter sunrise over the Nene Washes

A raptor fanatic, I had been hoping I might glimpse the Short Eared Owls that frequent the area.

I couldn't believe my luck when, within a few minutes of our arrival, I spotted one hunting over the water. I was all fingers and thumbs and my reactions were too slow, resulting in capturing the bird as it flew away from us. But I had seen my first ever Shortie. My smile had turned into a wide grin, which remained frozen to my face for the rest of the morning. 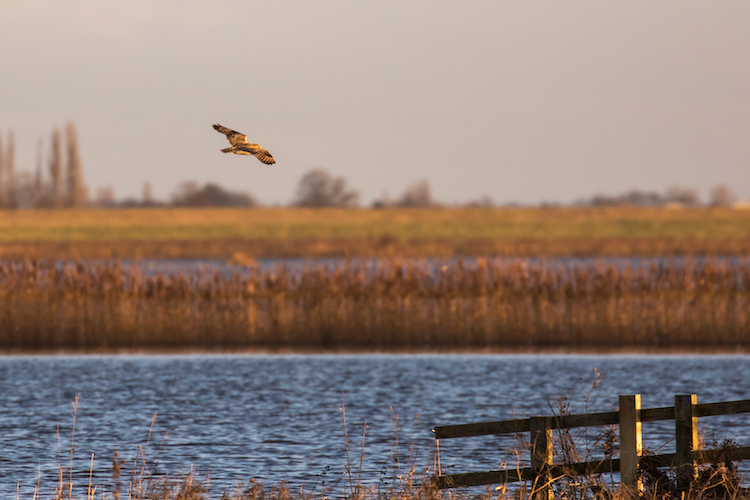 Happily the owl returned a number of times, allowing me the chance to improve my camera technique and get some better photographs. As the bank we could walk along was quite some way from the water, I was glad I had packed my extender for the long lens to give a little extra reach. 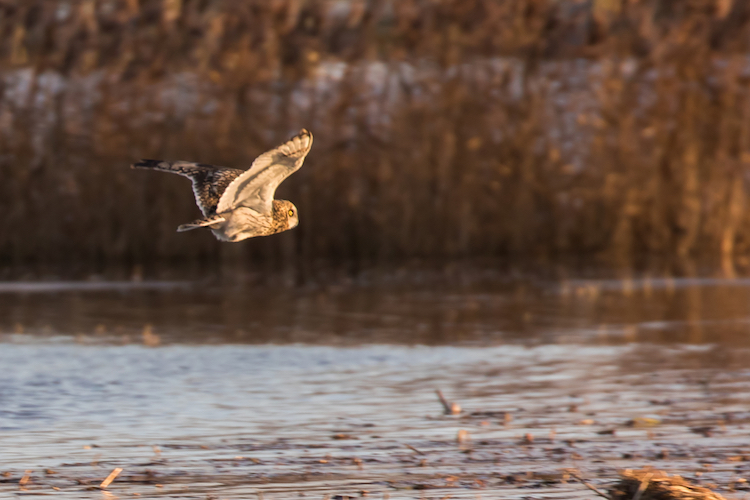 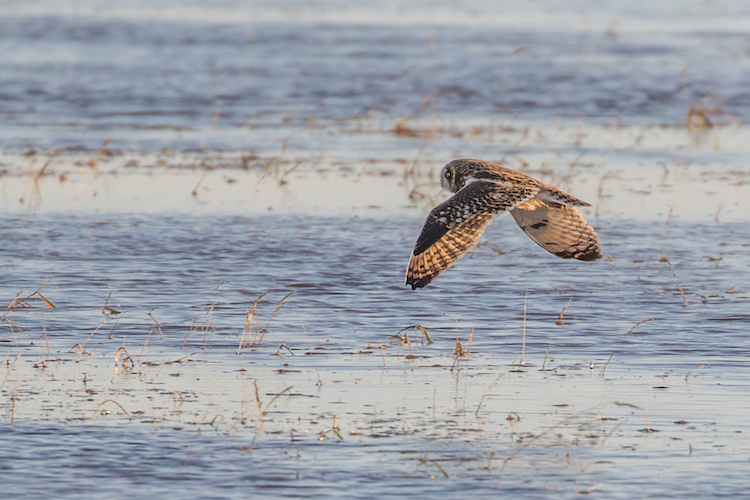 The owl wasn't the only wildlife on view. Out on the water was a family of Whooper Swans, their white feathers glowing in the low golden  sunshine. The young birds would have been this year's babies, and hadn't yet developed their yellow beaks. 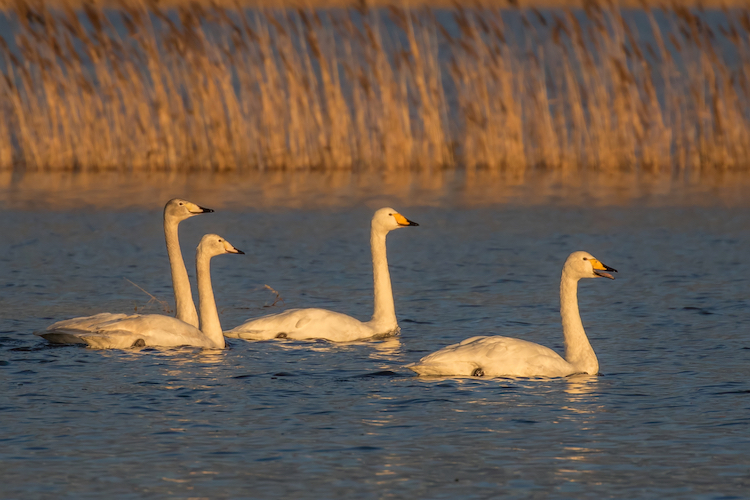 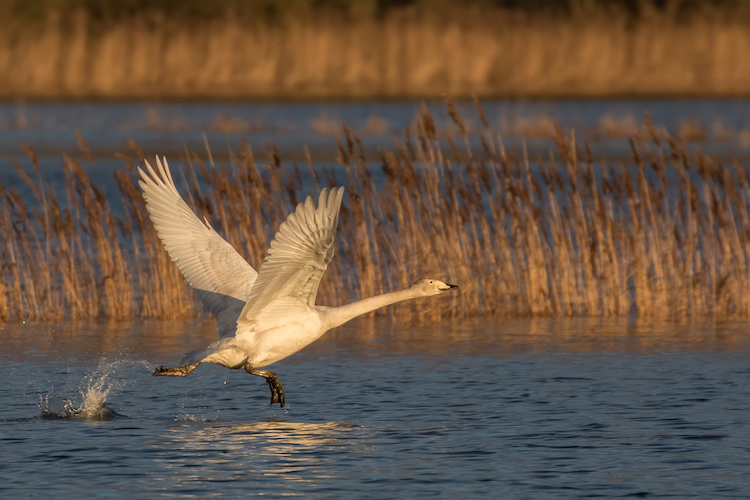 Other wildfowl was around, but too far out in the water to photograph. Instead I concentrated on practising my birds in flight photography as they passed overhead. I saw mallard, teal, pochard, shoveller, wigeon, gadwall and my first pintail ducks. 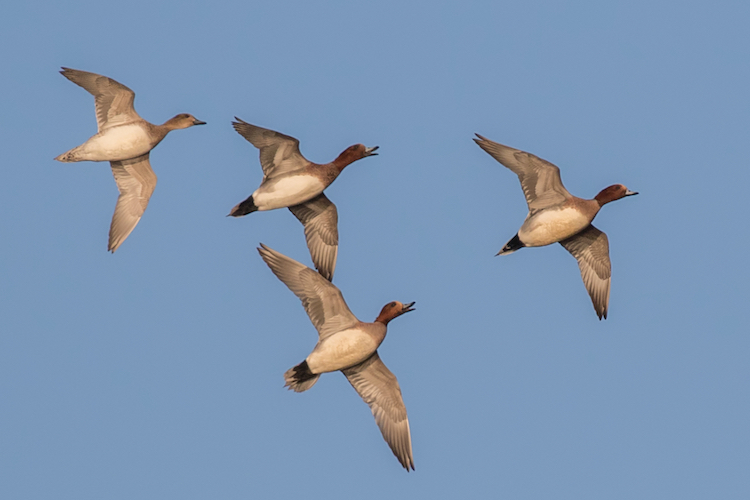 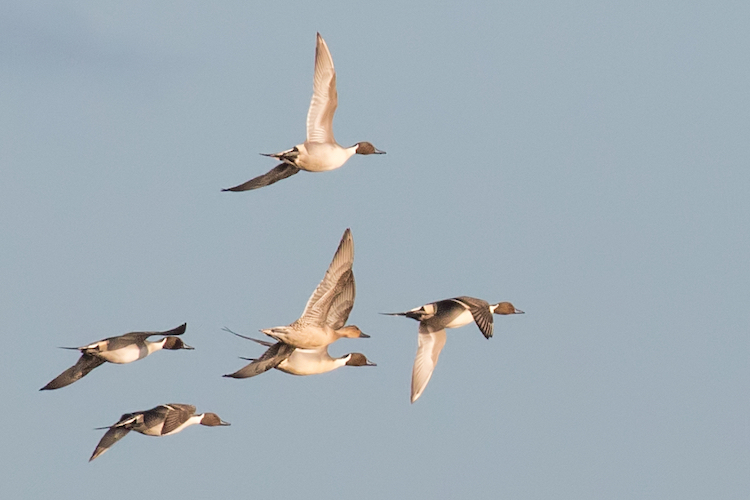 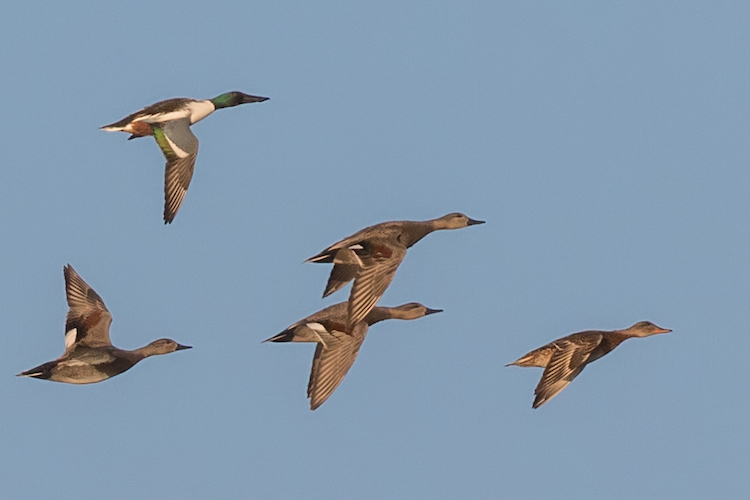 There were a few Lapwing, also known as Green Plover, flying around so I singled one out and took a series of pictures as it flew past. The benefit of a fast burst mode (10 frames per second) on the Canon 7D mark 2 meant that I managed one shot with the bird's wings in the upwards position.

When we first moved to West Cambridgeshire over 30 years ago these birds were numerous but they have declined in recent years. 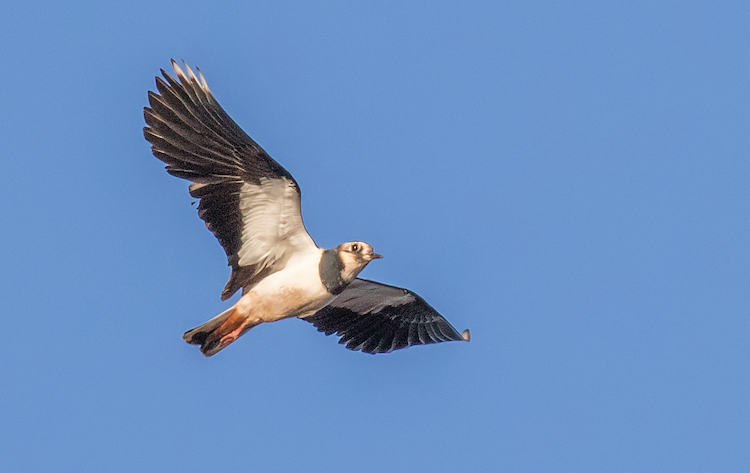 The Short Eared Owl was not the only raptor we saw during this wonderful winter sunrise. A female Kestrel was also hunting over the water. 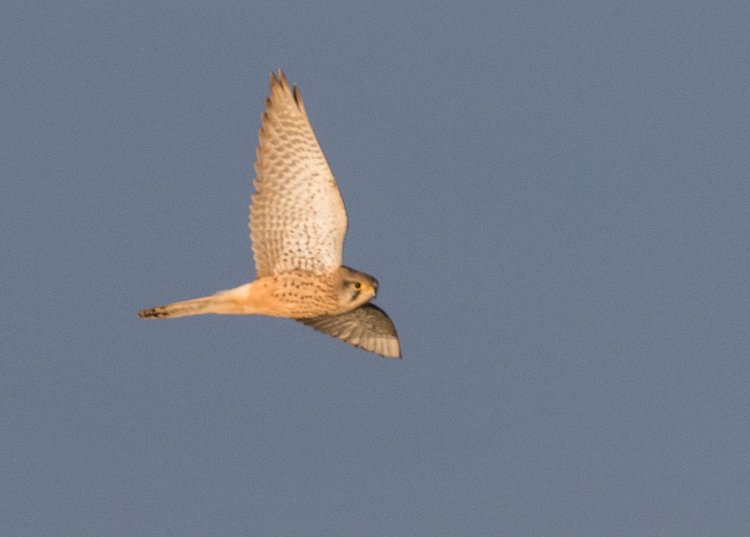 At one point if appeared that the Kestrel itself was being hunted by a Black Headed Gull. These gulls only have the characteristic dark head during the breeding season. 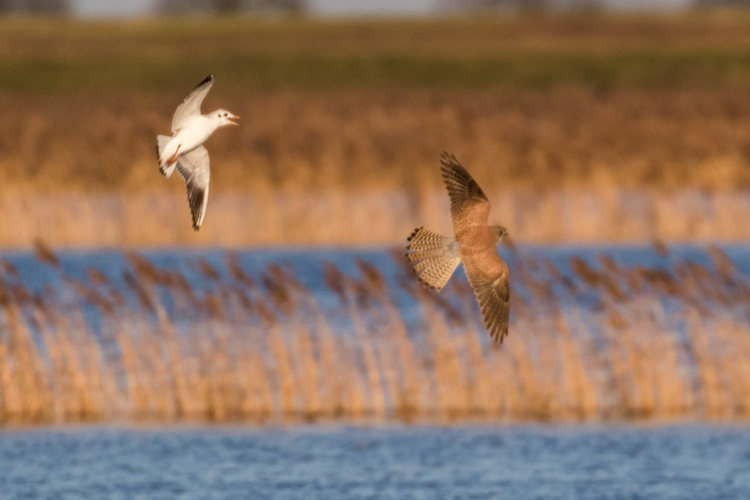 The last raptor we spotted was a Marsh Harrier, way out over the water. The next picture is an extreme crop. 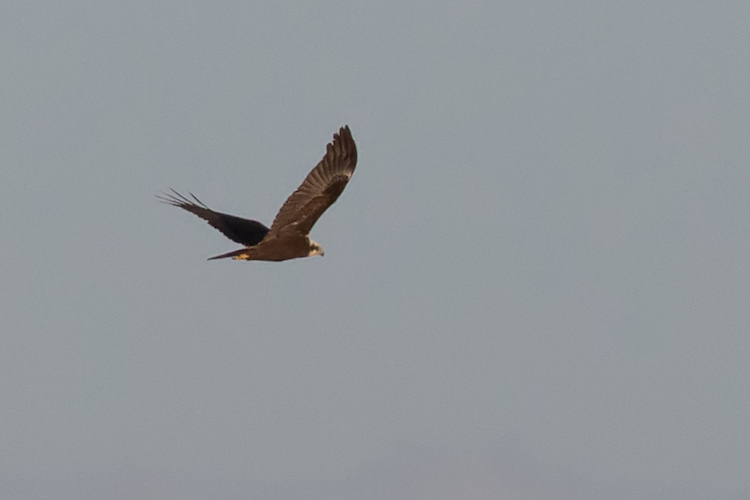 Fieldfare were also in abundance. A variety of winter thrush, I always love to see these birds when they visit us in the colder months. 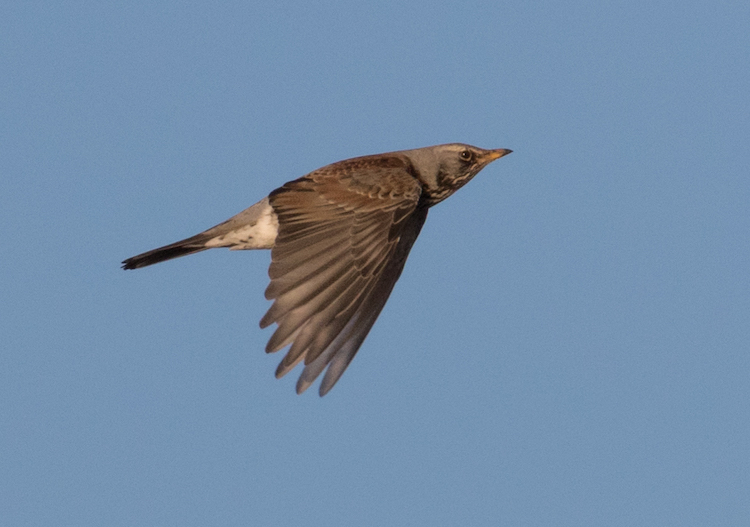 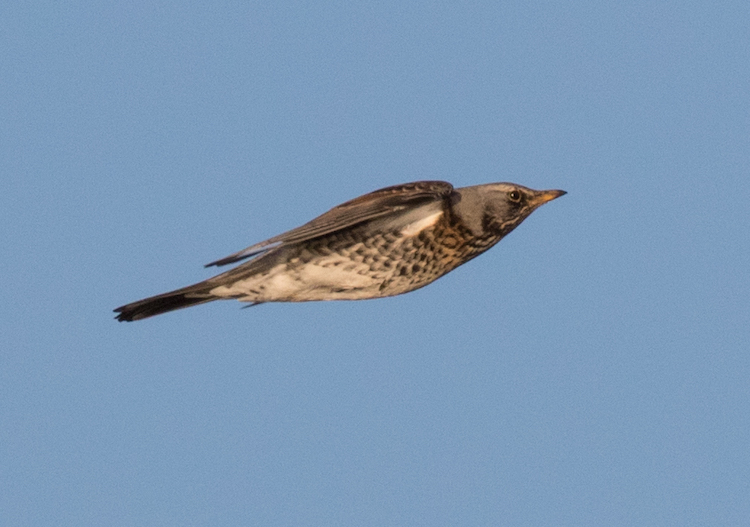 Six species of wild deer are found in the UK. Although common, it is rare to see the little Roe deer (one of our two native species) out in the open as they tend to keep to wooded areas. Therefore, I was delighted to spot a little group of one buck and two does bounding along beside the water.

As the background was a similar colour to their coats it was tricky for the autofocus to lock on, so I reverted to focusing manually for the following photographs. I opened the aperture to its widest setting of F5.6, increased the ISO to 640 and the resulting shutter speed of 1/1600sec was fast enough to get sharp pictures as they raced along. 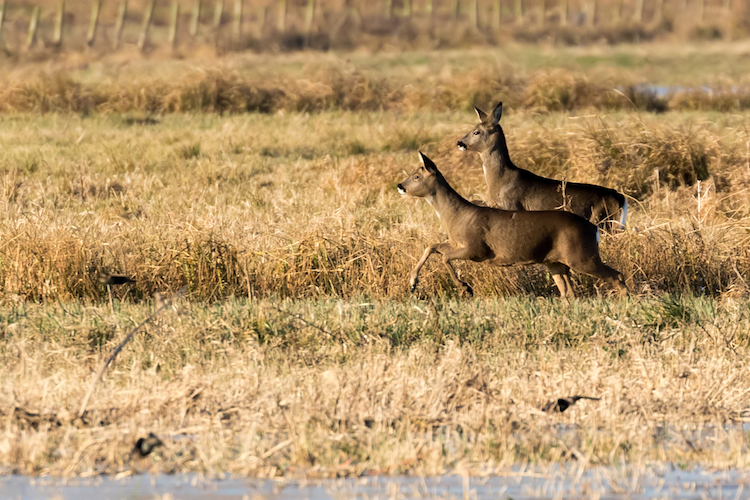 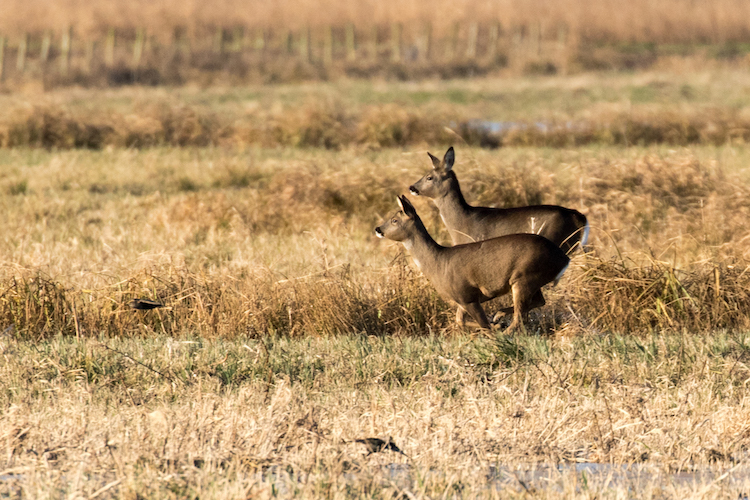 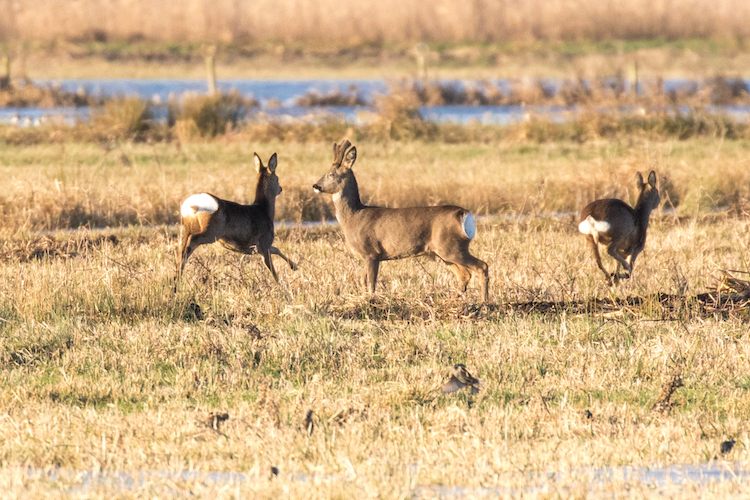 Up until this time we had the place to ourselves, but by 10:00am other people were starting to arrive. When one couple we spoke to told us a group of 200 people were due before noon we decided it was time to head home and warm up. I was also eager to  download the over 1000 wildlife photographs I had taken during this glorious winter sunrise at Nene Washes.

We headed back to the Nene Washes at the end of October 2018. However, it proved to be a little early in the year as there was no water on the fields and hence no wildfowl. As it was later in the day there was no winter sunrise either.

After walking for quite some way, hubby asked "what is that large grey bird with a white head?".  Getting excited, as I knew a certain species had been spotted in the vicinity, I trained my lens on the field he was pointing at.

Sure enough, not only one but four Common Cranes were standing there! Two adults and two youngsters. It was wonderful to add this rare bird species to my 2018 list of species seen. Sadly they were too far away for anything but record photographs but I was still enthralled by the sound of the calls, and could have stayed there listening all day. Unfortunately my hubby was bored at this stage and hinting that he wanted to head back to the car.

The Cranes disappeared from Britain about 400 years ago, and are now enjoying a comeback in certain areas, resulting in a current population of about 160. 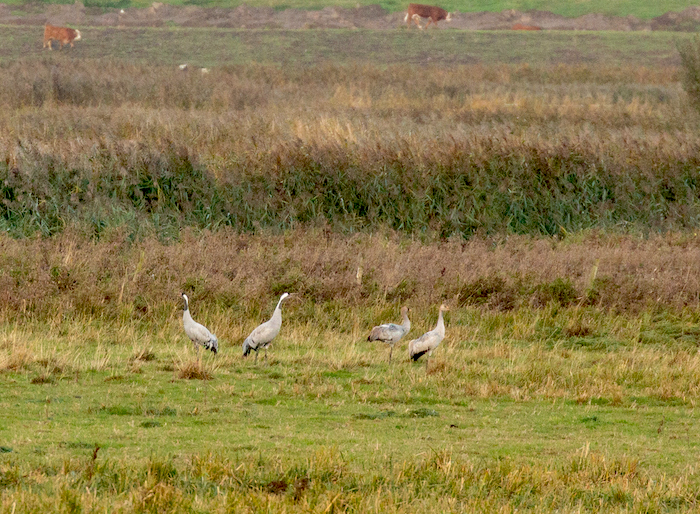 On the same day, two years later, we again visited Nene Washes, and the number of cranes in the area had expanded to around 60! I photographed this group as they started to fly in to roost. 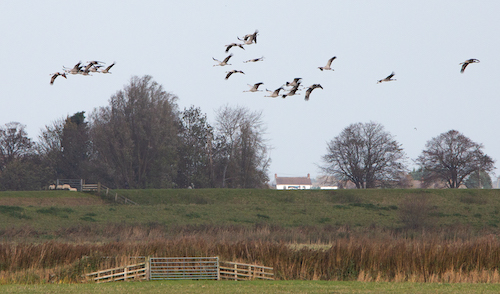