RSPB Fowlmere nature reserve is a recent discovery for us, despite having lived in Cambridgeshire for almost 40 years. Now we have found it, we will visit often as it is a lovely place for a short walk while observing the wildlife. Our hope is to see turtle doves which are reported to visit at certain times of the year.

The reserve provides one of the uk's rarest habitats, a chalk stream, containing brown trout and water voles.

Famous for water cress beds until the 1960s, there are now reed beds in their place. These are fed by natural chalk springs. 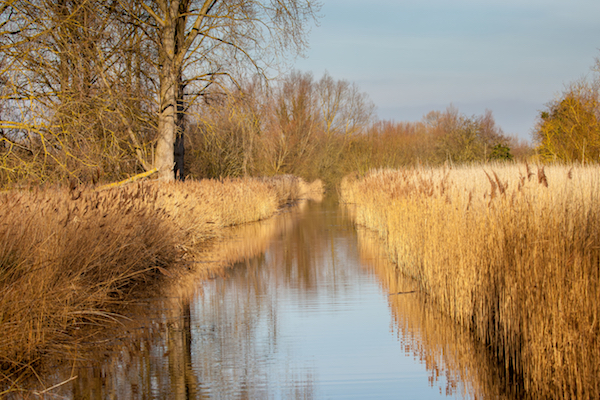 Our first visit to Fowlmere took place in February 2018. We woke early and set out into the cold, misty morning hoping the weather would improve by the time we reached the car park. Happily the mist cleared by the time we reached the M11 near Cambridge. After leaving the motorway we drove through a number of villages and down a narrow lane where we parked the car and set off on our nature walk.

As we entered the quiet reserve we passed a small wooden building and a chemical toilet facility. We followed the signpost for Spring Hide heading in an anticlockwise direction. Due to recent wet weather the path was quite muddy in places.

Upon reaching the first hide we sat awhile but any wildlife around concealed itself too well for us to spot, therefore we walked on.

A side path took us to the elevated Reed Bed Hide, accessed by a set of wooden steps. This gave a great view of the reed beds and a large pond/small lake.

Here we spotted a group of Teal, my favourite overwintering ducks. The males have chestnut heads with dark green eye patches and a distinctive yellow triangular area near their tails. The females are more drab in colouration. These ducks are smaller than the more common Mallards.

A large flock of noisy Greylag Geese flew in to the pond while we sat in the hide. 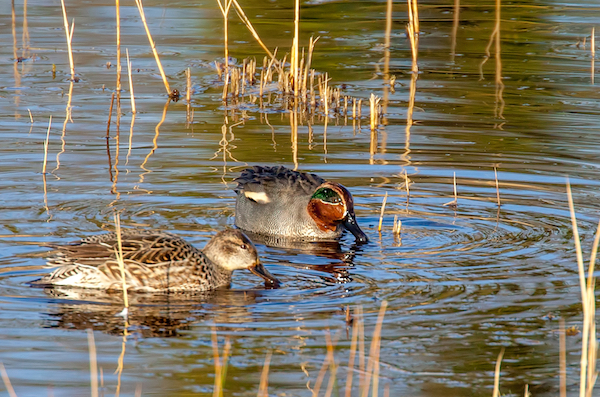 We moved on, and as I walked past the wet, muddy fields a movement caught my eye. It was a brown hare which was then joined by a second. I fired off many photographs before they changed direction and headed away across the field. What a thrill that encounter was!

My husband was far ahead of me, as usual, so sadly he missed the hares. Due to my many stops to take photographs I am normally quite a way behind him. Often this works against me, as he frightens the creatures off before I reach them, but on this occasion I was lucky.

His fieldcraft skills leave a lot to be desired! He doesn't seem to understand that shouting at me to say he has just seen something interesting is guaranteed to mean that it is well gone by the time I catch up to him. Where I walk softly on the grass beside the path, his boots crunch on the gravel announcing our presence to all wildlife in earshot. 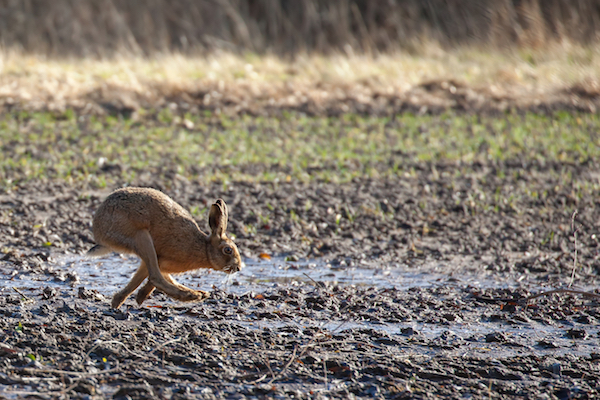 A few minutes later we turned a corner to find a beautiful array of snowdrops beside the pathway. Nearby, we also spotted the bright green of water cress still surviving in the stream here at RSPB Fowlmere nature reserve. 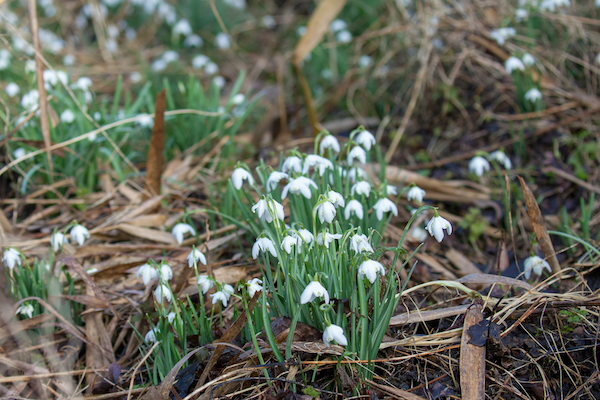 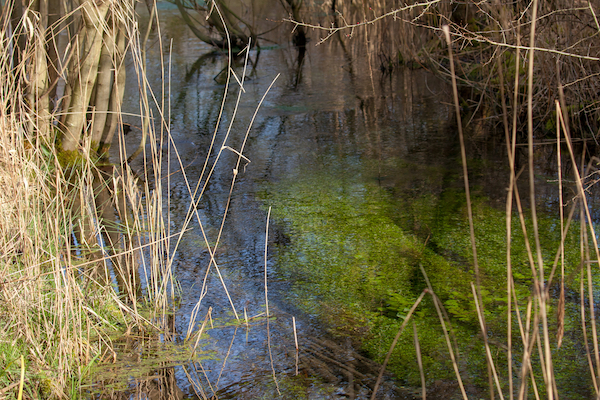 Our last stop was the Drewer hide, occupied by the only other person we had seen during our walk. Humans were a rare species on this cold February morning at Fowlmere! He told us that later in the year this hide was great for viewing kingfishers. He also mentioned that a white Water Rail frequented the area. Neither put in an appearance for us.

We revisited Fowlmere in May 2018. The weather was very different this time.  It turned out to be the hottest Spring Bank Holiday on record with temperatures reaching 26oC.

This time the air was full of bird song, and the landscape had turned from brown to bright green. There was no one else around as it was still early morning.

We walked in the opposite direction to last time, visiting the Drewer Hide first. Here we sat and watched an adult Little Grebe feeding her young. The still water allowed perfect reflections of the birds. 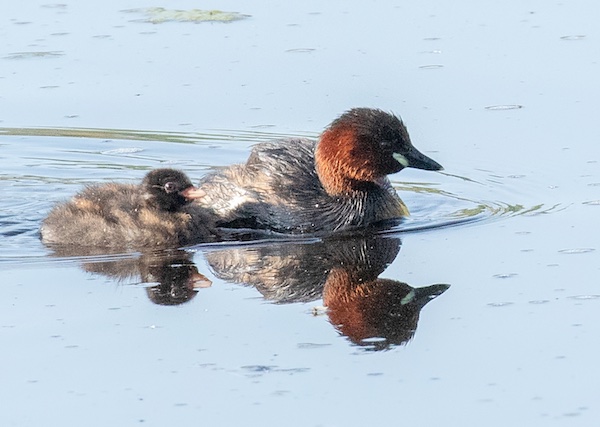 Little Grebe and her baby

A bevy of Warblers

As we walked on, we could hear warblers singing all around us. With the trees leafing up they were difficult to spot, but I did photograph a Chiffchaff and a Willow Warbler.

These birds are difficult to tell apart, and I always struggle. Chiffchaffs have darker legs but if the light is against you that doesn't always help. The Willow Warbler has longer primary feathers on its wings.

If you hear them, it is easy to  distinguish these birds from each other as the Chiffchaff repeats its name over and over "chiff-chaff, chiff-chaff" while the Willow Warbler has a melodious song. 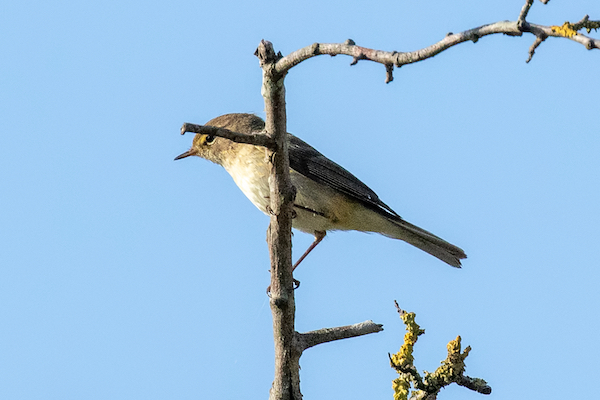 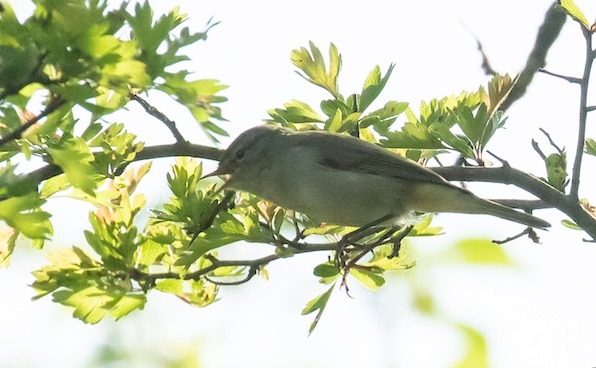 We also heard, then saw, a Sedge Warbler. I shot a very short video to capture the sound it makes. It was too far away for photographs on this occasion so I have added a picture from a different walk. Sedge Warblers have a distinctive white "brow" above their eyes and a stripy crown. 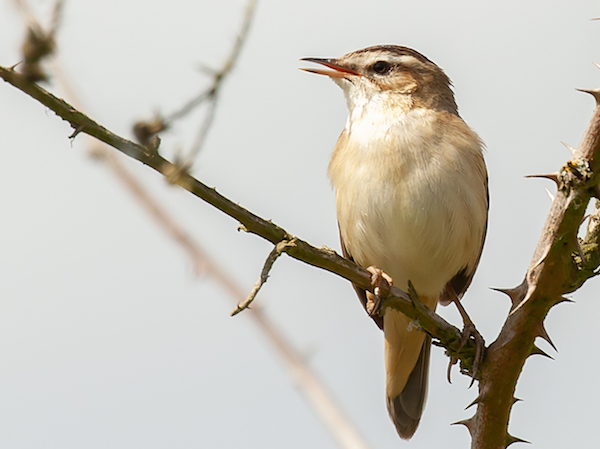 Once we reached the raised Reed Bed hide we could look down on the reeds and get a better view. Within minutes movement beside the water attracted me and I glimpsed a Reed Warbler.

It is unusual to get a clear view, and photograph, of these birds so I was lucky to succeed. 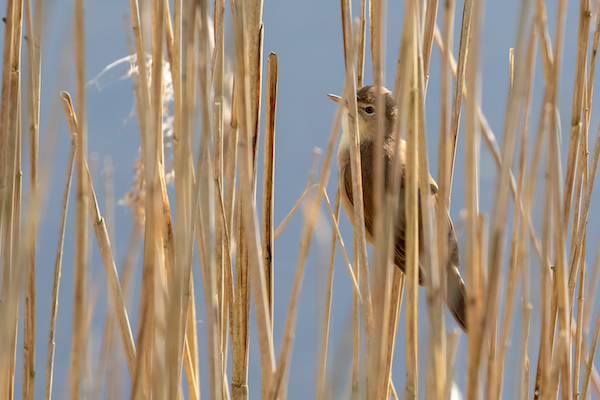 Two photos of a Reed Warbler 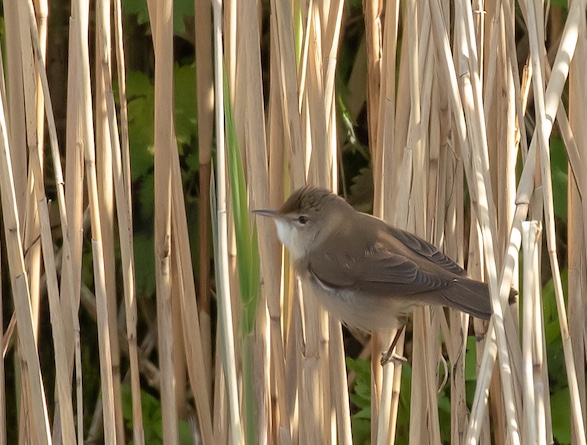 Above the reeds we spotted Marsh Harriers hunting. I believe there were three although we only saw two together in the air. They were breeding in the area, and one bird was a youngster. The adult caught food on two occasions and flew down into the reeds with it where it stayed for some time.

One bird obligingly flew against the plain blue sky allowing me to use multiple focus points on the camera to grab a shot. However, when they flew in front of the trees or above the reeds, it was more difficult to lock focus on them. Many of my shots had a sharp background and blurred birds.

In an ideal world I would have liked my Marsh Harrier photographs to be sharper, but many people never see these wonderful birds of prey, so I can't complain. 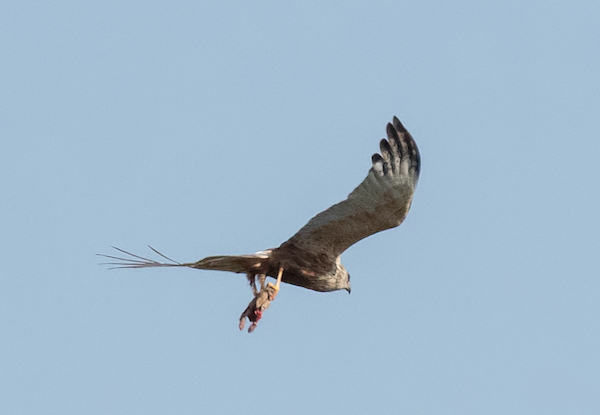 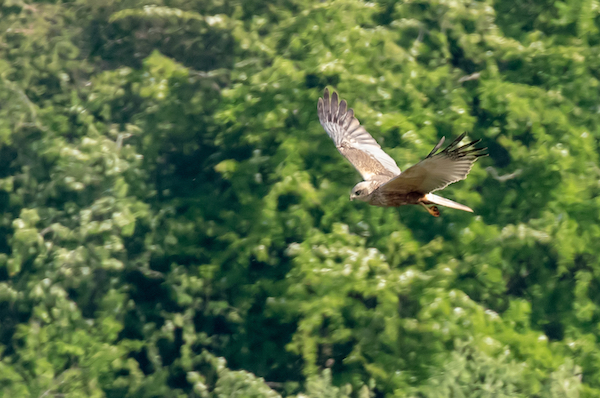 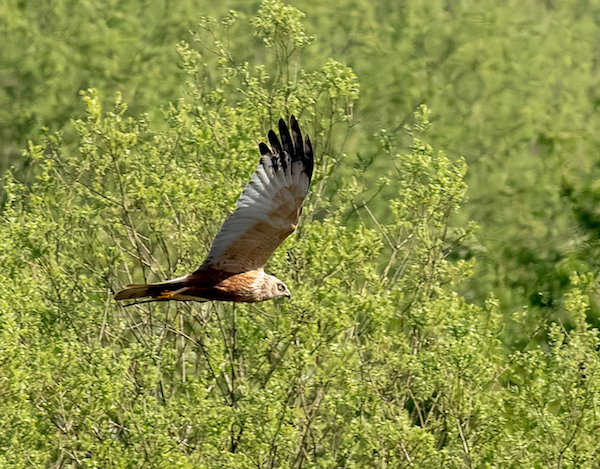 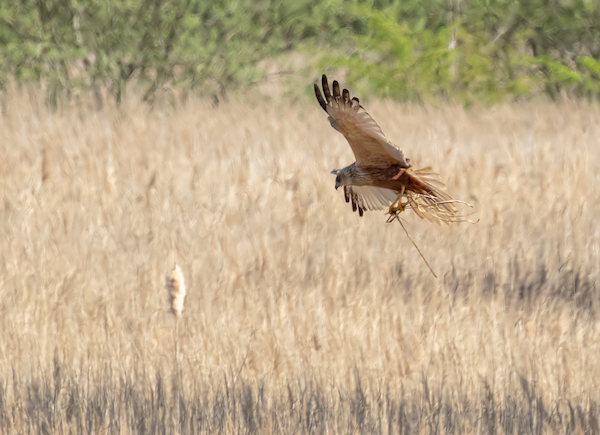 After viewing the delightful Marsh Harriers  a loud, clear call made me jump. I didn't recognize it at first. When I  spotted the birds making the sound, I realized they were Linnets.

There was a small group of them, including one male, perched in a tree beside the hide. I had a lovely view of the attractive pinkish breast feathers of the male. The females were less colorful, but still pretty birds. Both sexes show a distinguishing pale cheek patch 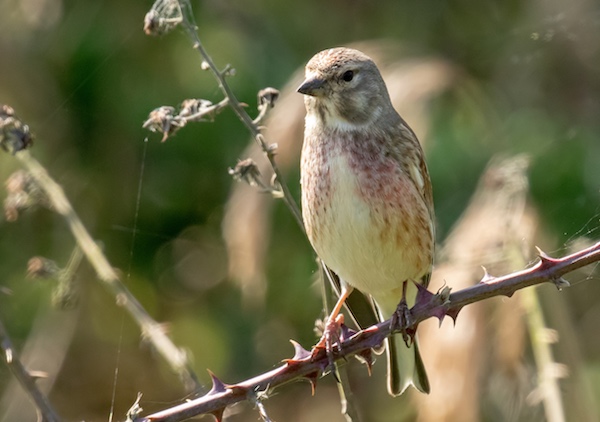 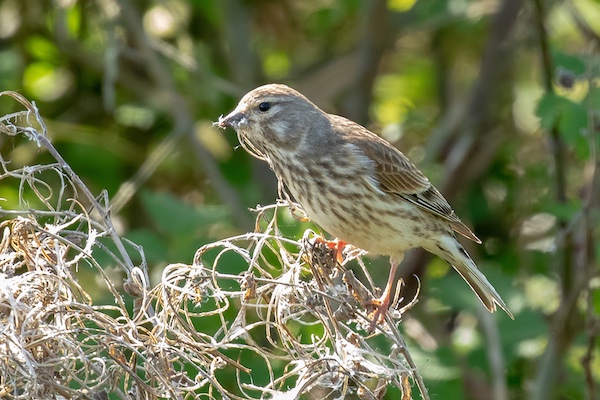 After taking some photographs I turned the camera into video mode.  My video skills need work, but I will leave you with the enchanting sight and sound of these lovely birds.