We were told by fellow birdwatchers that Bempton Cliffs, near Flamborough Head on the East Yorkshire coast was the best nature reserve to visit if we wanted to see gannets and puffins. "It’s one the greatest wildlife spectacles in the country", they told us.

So we booked accommodation in nearby Bridlington, in the east riding of Yorkshire, for a long weekend in June. This was the height of the seabird breeding season, and we were hoping that the area lived up to our expectations.

With my fear of heights, I was concerned beforehand that we would be walking along cliff top paths, and would have to look down to see the nesting birds on the cliff ledges below. I have balance issues and had experienced nightmares of falling over the edge into the cold North Sea during the week prior to our trip.

Happily, after showing our RSPB members cards at the visitor centre I discovered that the footpath and viewing platforms had fences and the risk was minimal if we followed the guidelines. 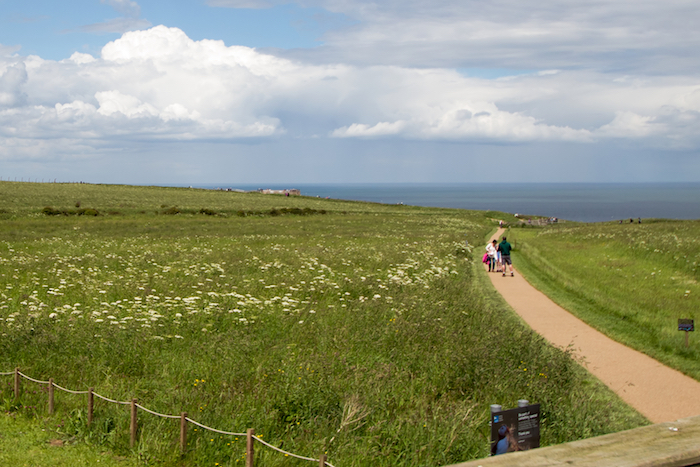 It didn't take long for the sights and sounds of over half a million seabirds to take my mind off the sea cliffs and onto my photography.

When we came back a year later, I had upgraded both my camera and lenses.

The Atlantic Puffin was the real draw for me.

“There’s a Sea Parrot” exclaimed a man to my left. What? He was pointing to the side of the cliff, so I focused my lens on it, using it as a telescope. My first puffin! It is one nickname given to them, due to their colourful beaks. Another is The Clown of the Sea, no doubt for the way they waddle with their big orange feet.

Even with my 150-600mm lens, the bird was too far away to get a detailed photograph.

However, it isn't the sharpest lens in my camera bag and even supported on a tripod didn't give me the quality I wanted, so the following day I swapped to my 70-200mm f2.8 with 2x extender. On the Canon 7D mark 2 this still allowed autofocus and proved a much sharper combination even though it had a shorter focal distance. 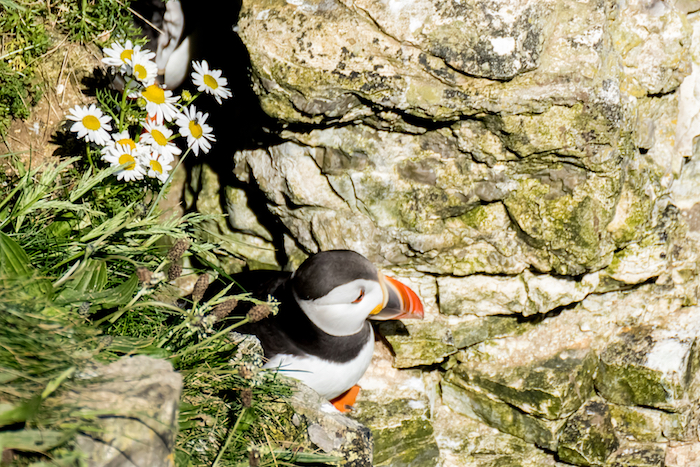 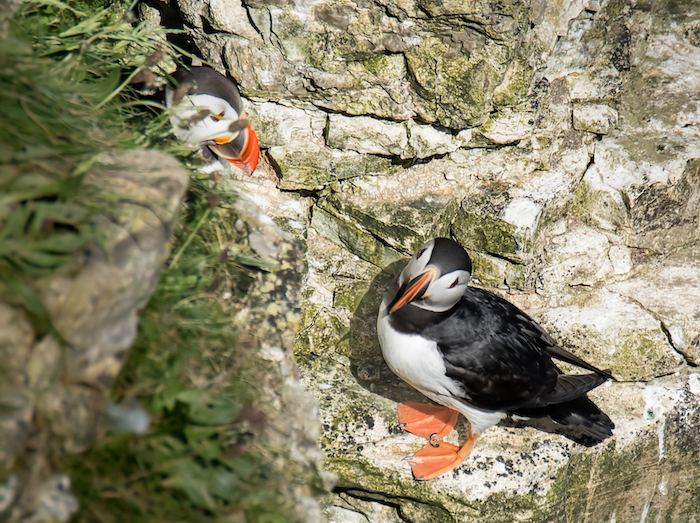 As you can see from the above photos, taken on the first day, I had to contend with harsh shadows. Only a photographer could find a  sunny day disappointing, eh? At least it meant that my husband didn't mind traipsing along the cliff top for hours while I was engrossed.

He wasn't so happy to be out in the biting wind and rain the following day. When trying to show our membership cards on arrival, they were waved away with the comment "Only RSPB members are daft enough to visit in this weather!"

By far the largest seabird at RSPB Bempton Cliffs, the gannet with a wingspan of 2 meters, is a stunning white bird with black wing tips and creamy yellow heads. This gannet colony at Bempton Cliffs is the largest mainland gannetry in England.

They flew quite close, before dropping down on to the cliffs where their mates were waiting on the nest. They had brought with them gifts of seaweed for their partners. They raised their beaks into the air and gently touched the tips together.

I was enthralled by these magnificent birds and took hundreds of photos of them! 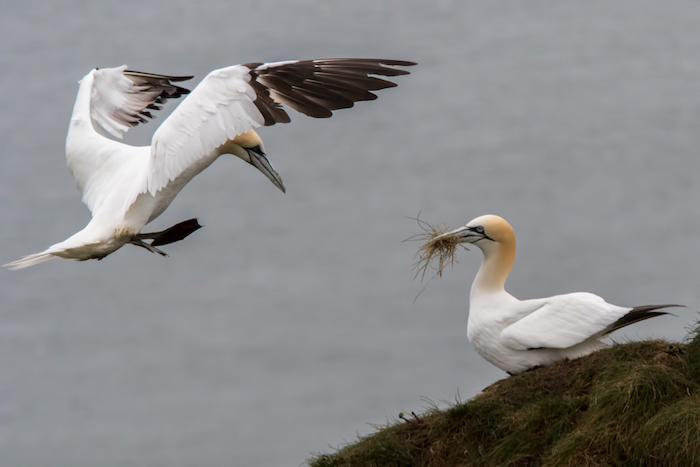 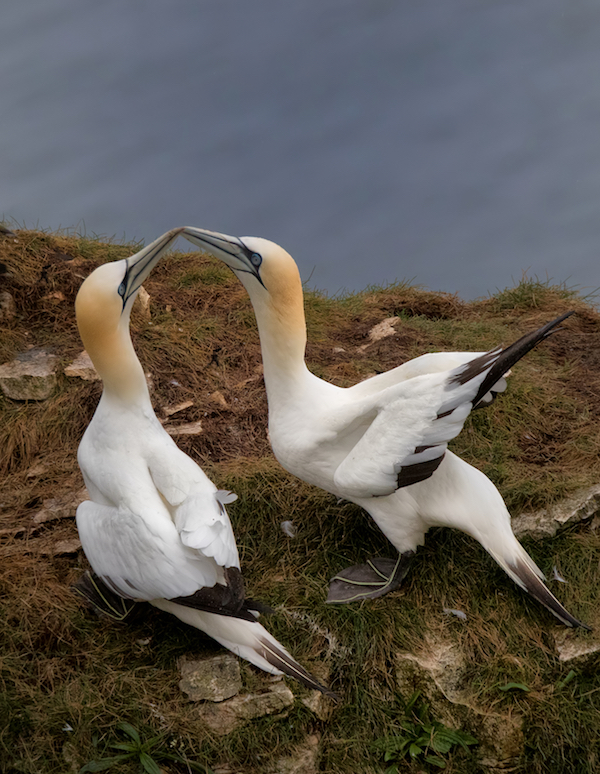 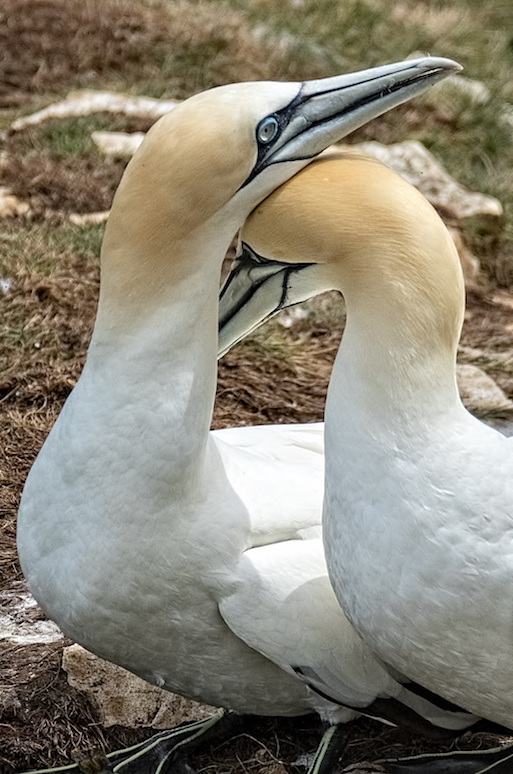 The sheer number of these birds was a sight to behold. Not having a sense of smell was a benefit, with many commenting on the stench rising from the cliff face.  After a while my ears became accustomed to the barrage of sound that thousands of quarreling sea birds produce. 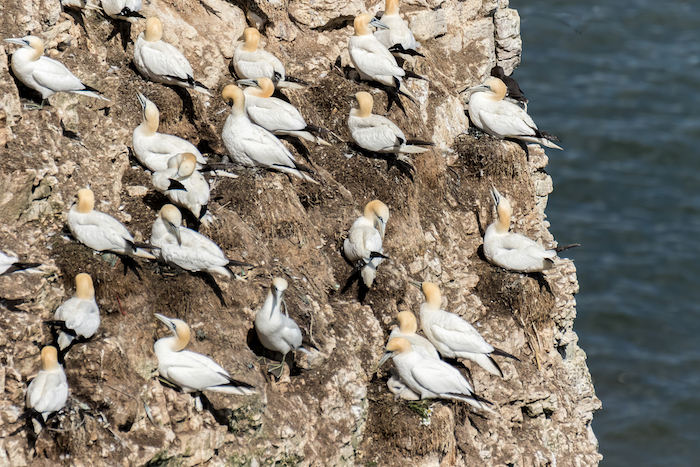 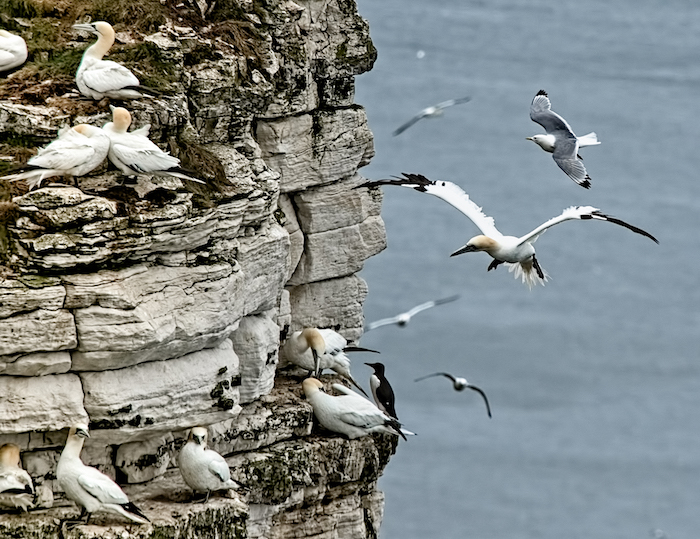 It wasn't until we got a close view of these stunning birds that we realized that they had green stripes on their feet and sky blue rings around their eyes.

We weren't able to go out of a boat trip this time around, so my desire to photograph them diving was not fulfilled. We did sail on another visit to Bempton, but still no diving gannets, sadly.

Another place we have enjoyed a boat trip was closer to home, on the Rutland Belle Osprey Cruise.

The seabird colony at RSPB Bempton Cliffs also hosts other breeding seabirds. Smart in their contrasting plumage were the Razorbills and Guillemots.

The black and white Razorbills have a heavy beak with a fine white line across the tip whereas the Guillemot's bills were more pointed. On close inspection the darker feathers of the Guillemots were brownish, not black.

The puffins, razorbills and guillemots, although different species, are all members of the auk family. 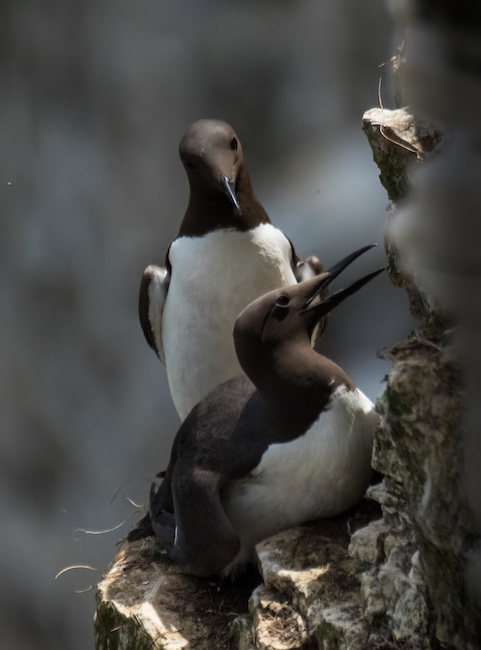 Although their wings make them inefficient flyers, Guillemots are excellent swimmers and can dive deep under the surface of the sea in search of fish and sand eels. They often reach depths of 30 metres or more and can stay down for over 2 minutes.

They crammed themselves onto the narrow ledges with hardly a gap between pairs. They don't build a nest, laying their one egg directly on the cliff surface. Unlike a hen's egg, they are pointed at one end. This is said to be so that they don't roll off the cliff, but instead spin in a circle. 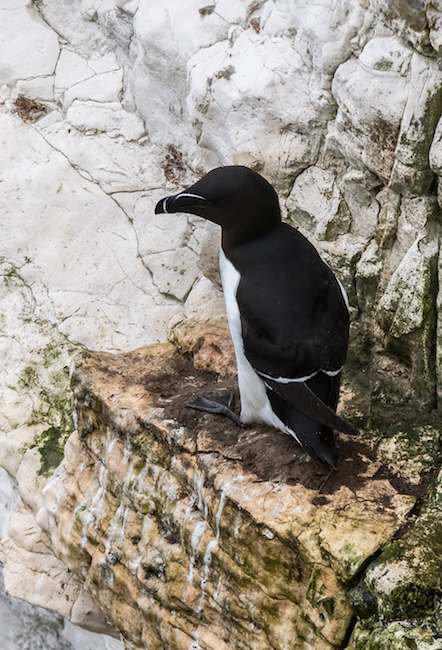 The Razorbills reminded me of penguins, with their white chests and pitch black backs and heads. They were a more stocky bird than the Guillemots with short necks, flat heads, wide but flat beaks and long pointed tails that covered their feet in flight. When they lay down they resembled a banana in shape as that tail sticks up in the air!

They also only lay a single egg and before the chick is three weeks old it will jump from the towering chalk cliffs into the sea, often bouncing off rocks on the way down! Luckily for the babies, their fat and feathers prevent them from getting seriously hurt in this adventure.

Kittiwakes are medium sized gulls with yellow beaks, white heads and grey backs, with a tail that appears to have been dipped in black ink.

The nesting birds gathered together in colonies on the cliffs; they were the only birds we saw with eggs. They have a distinctive call, from which they got their name.

These lovely little birds are on the red list due to their declining numbers. If you are going to see them on the cliffs it will be between February and August as they spend the remaining months out at sea. 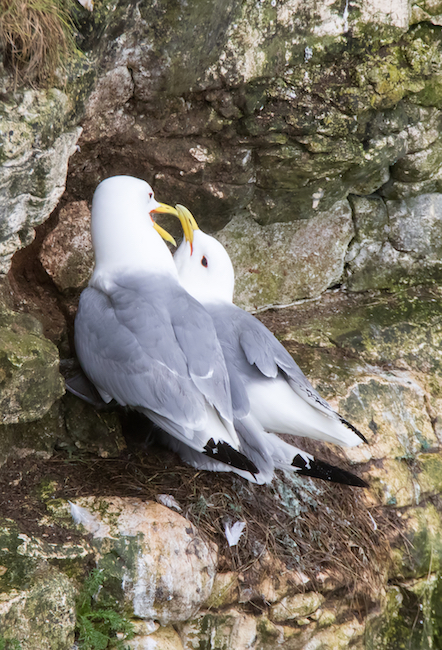 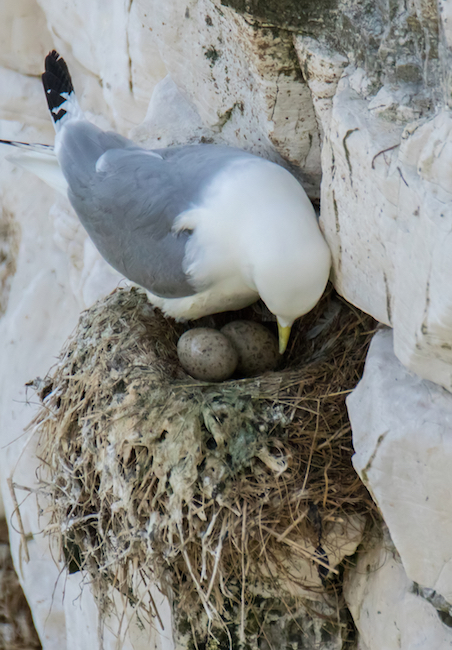 Was it a gull?

Another bird we spotted at first looked gull like, similar in size to herring gulls, but with a white head, grey wings and a yellow beak. Closer inspection showed that the beak had a tube like lump over the top of it. It was, in fact, a Fulmar.

You really don't want to get on the wrong side of a Fulmar as they are known to spit at you, and that substance smells VERY bad!

Smaller birds spotted in the area

Being a nature reserve, Bempton Cliffs has more to offer than the seabird colony! In the bushes around the visitor centre we found a little flock of Tree Sparrows with their chocolate brown heads and black cheek spots.

Perched on the hedge beside the footpath leading from the visitor centre to the cliff tops was a lovely male linnet, and then there was a surprise!

On our way back to the car a bird flew past in front of us, squawking. I managed two quick grab shots and on studying them while enjoying our refreshments I realized it had been a Parakeet! An escaped pet, as was the budgie  seen (and caught) the week before our visit.

We enjoyed our trip to RSPB Bempton Cliffs nature reserve so much we returned in June 2018. You can read about that visit here.