We regularly visit Fermyn Woods Country Park in Northamptonshire as it offers a variety of walks and habitats. We can enjoy a quiet stroll through the forest, a wander across the meadows  or just sit by the ponds watching the wildlife.

There are three waymarked routes in the park ...

...but we often like to find our own way and don't always start from the car park near the café and children's play area.

His Majesty the Purple Emperor 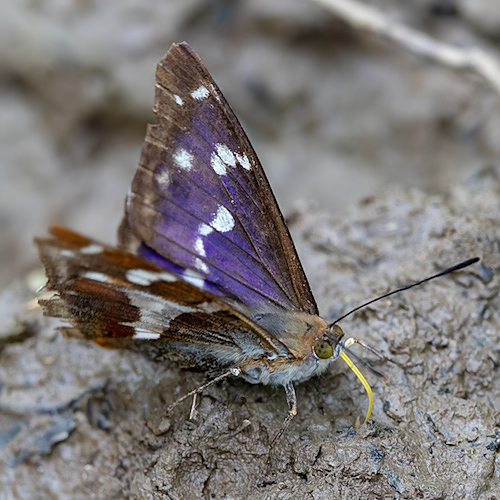 My first ever Purple Emperor

The park is one of the few areas in the country that is home to an elusive butterfly, the Purple Emperor.

We had often ambled through the woods searching for that flash of iridescent purple, but without success until one very special day. My birthday! This is in July and it is also the month that the Emperors are on the wing.

They are not easy to spot mainly because their realm is at the top of oak trees. When they do come down from the trees they tend to head straight for a muddy puddle, a pile of faeces or even a rotting corpse rather than sweet smelling flowers. In fact, due to their disgusting habits, some enthusiasts have been known to bait them with rotting food or smelly cheese.

That particular day we had set off early to Fermyn Woods Country Park full of hope as usual.

After a long trek through the woodland rides we eventually turned back, despondently. Rounding a bend, we spotted a small group of people sitting and laying on the damp earth to the side of the path. The hum of excited chatter and the clicking of cameras indicated to me that the elusive quarry had been found! Sure enough sitting in a puddle was a male Purple Emperor drinking the muddy water.

I dropped to my knees and joined the throng of delighted lepidopterists (people who study butterflies and moths) waiting for him to open his wings and offer a tantalising glimpse of purple.

I didn't have the ideal lens with me for the purpose but I wasn't going to let that stop me from getting a "record shot" to prove I had seen him. Words can't describe the wonder of that encounter, I was definitely smitten with the "bug".

By the end of the month they were all gone so I had to wait until the following year for my next sighting. Having done more research this time, we headed out on the 1st of July for a particular area of the wood where His Majesty had been spotted. It was a long walk and a stinking hot day but this time we were well rewarded.

I managed to find the first one myself, perched on a bush which was a nicer background for photography than a puddle. Within seconds of setting up the camera on the tripod a Silver Washed Fritillary flew into frame and chased off the Emperor. I was ecstatic to capture photos of the full sequence. 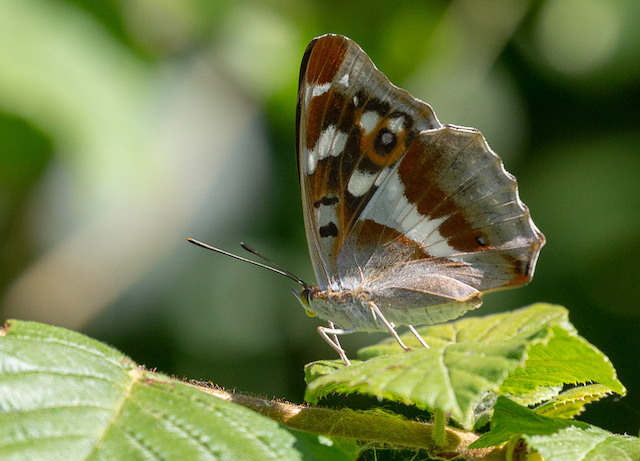 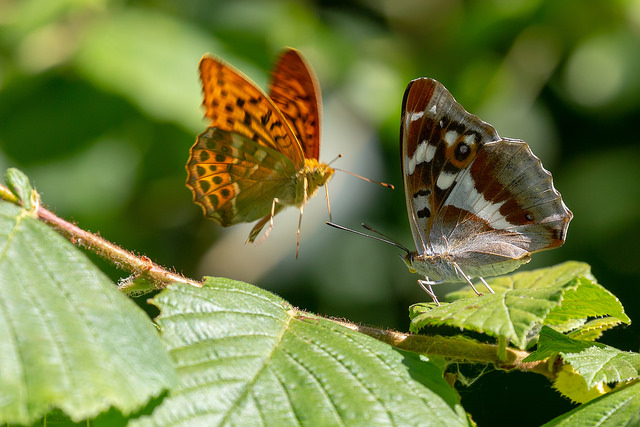 In flies a Silver Washed Fritillary 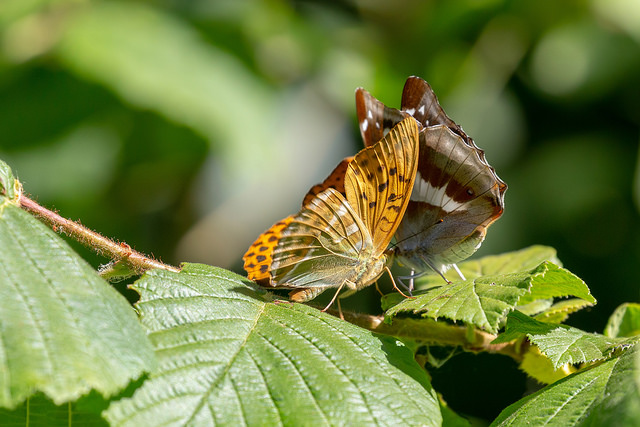 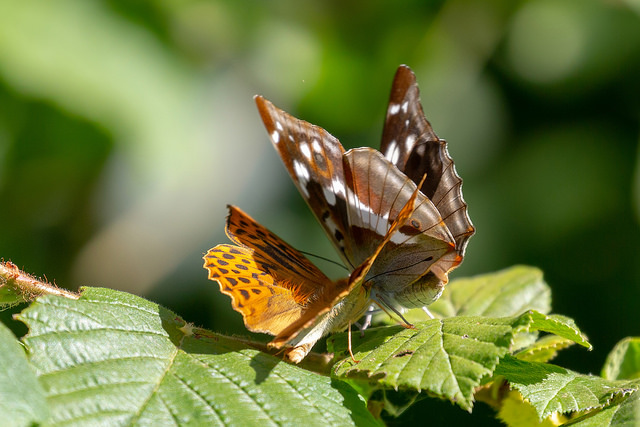 Heading back to the main path we met the butterfly paparazzi, in the now familiar seated position, photographing another male Purple Emperor. I lay on the ground, which was dry this time, and succeeded in getting much better photographs than the year before. Eventually my husband had to drag me away or I would have been there all day!  Never fully satisfied, you can be sure that I will be back to Fermyn Woods Country Park next year to hopefully find his Majesty again. 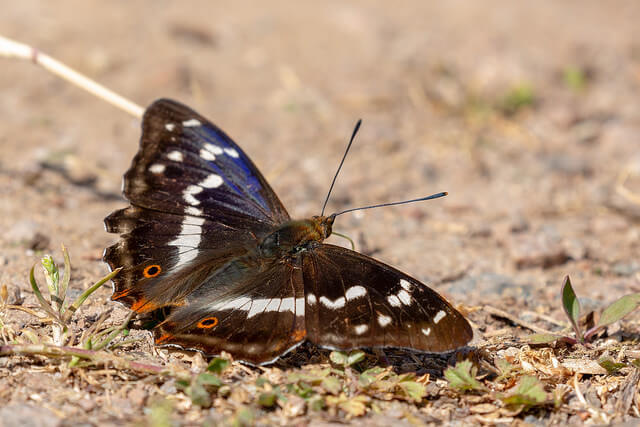 A hint of the purple upper wing 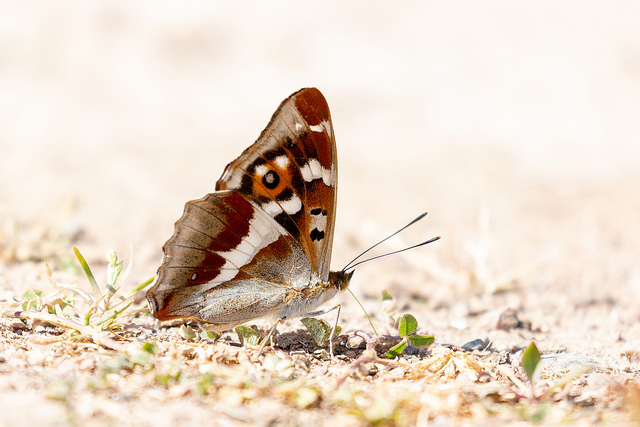 Taken with the camera on the ground

After a five-mile walk looking for his majesty, we again only found one on our way back to the car. A lovely male whose wings flashed purple in the sunlight. 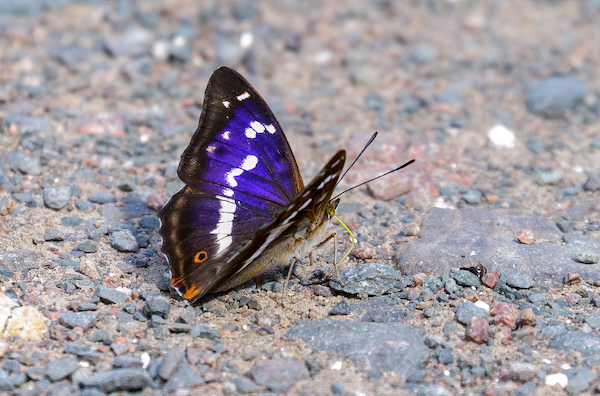 The edges of the wood and the meadows are home to many different butterflies during the summer. One great place to find them is not far from the visitor center. Take the path that leads behind the café, cross the little bridge and bear left. You will pass a small pond before coming to an information board with pictures of the species that frequent the park. The scrub and grassland in this area is ideal for butterflies and day flying moths.

Venturing deeper into the forest there are even more to be found. The gallery below shows some that I have photographed at Fermyn Woods Country Park . 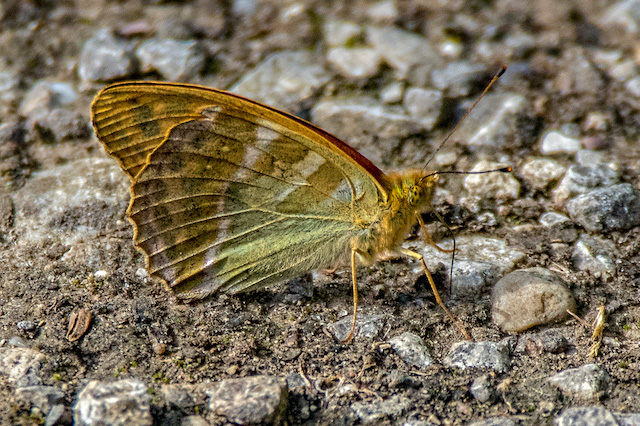 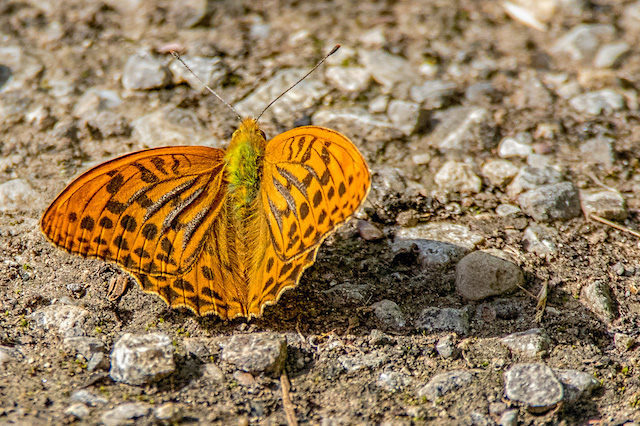 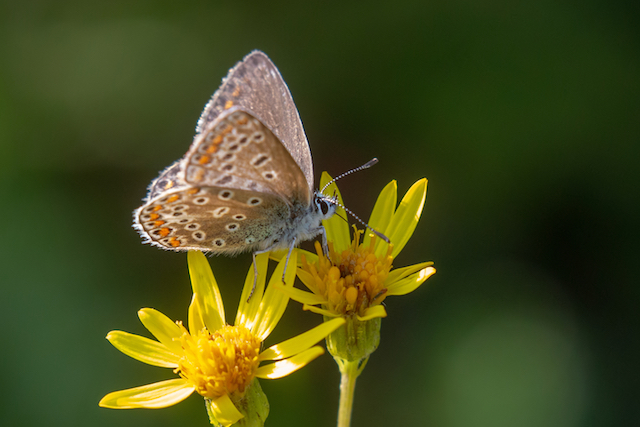 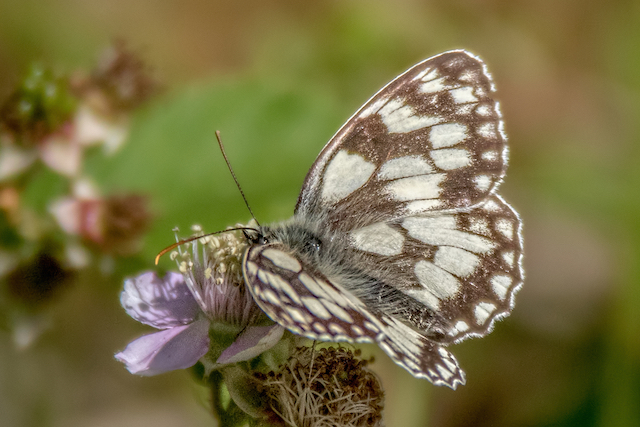 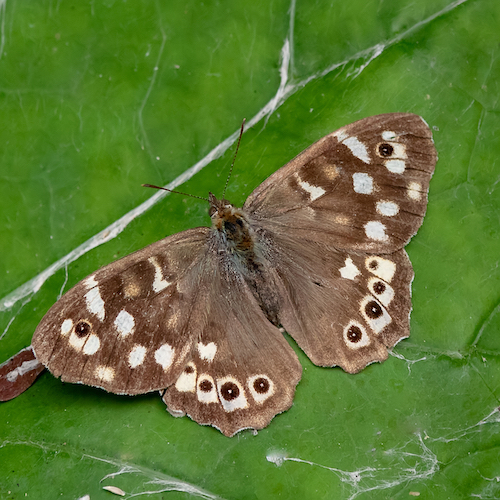 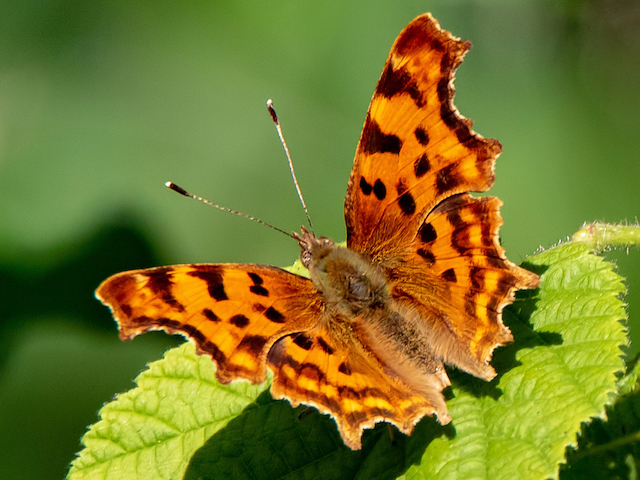 The Comma with it's distinctive wing shape 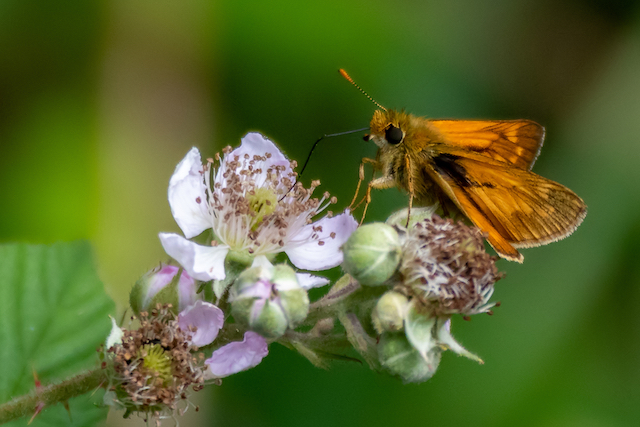 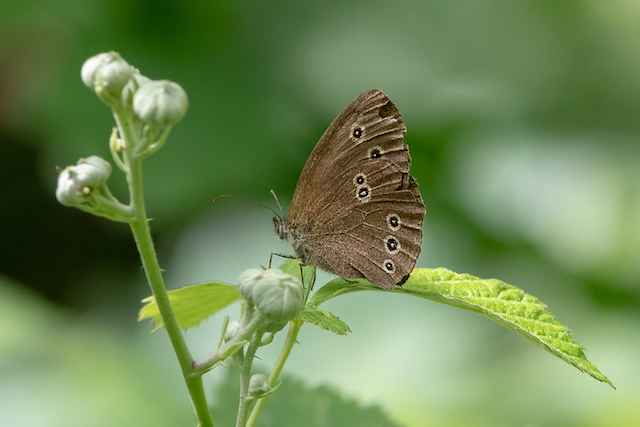 A trip to Fermyn Woods Country Park is likely to reward you with views of Red Kite, a bird of prey that was once almost extinct in the UK. A small group were released in Buckinghamshire in the late 80s and they slowly began to breed and spread across East Anglia and further afield.

Our first sighting was along the road past Fermyn Woods, or Brigstock Country Park as it was then called. It was so exciting when we saw one of these magnificent birds overhead. They were easy to distinguish from the more common Buzzard due to their size, rich red brown colouring and forked tails.

As the years have gone by they are now a familiar site and we often see they flying over our back garden, although I don't always have the camera at hand to record the events.

Often the first indication that a kite is around is the eerie "mewing" call that they make. This gives me a "heads up" that one is around so that I can locate it and take a photograph (or ten).

My first few attempts resulted in a silhouette against the bright sky. I quickly learned that it was necessary to utilize the Exposure Compensation function on the camera to fool it into exposing correctly. Often a compensation of two to three f-stops is necessary to lighten the bird enough to see the feather detail and colours.

I also learned through experience that taking a picture when the Red Kite is a speck in the distance is not worth the time. It takes patience to wait until they are close enough to fill enough of the frame to make a good shot. 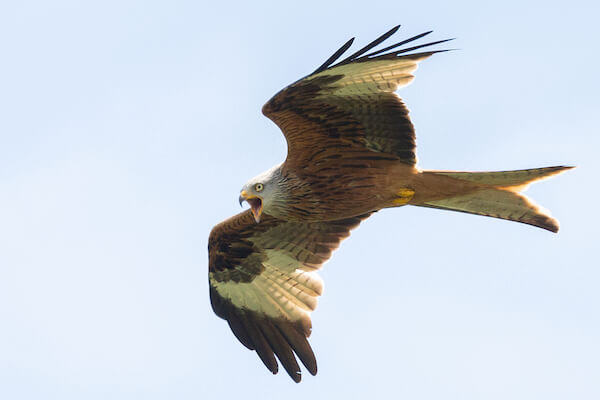 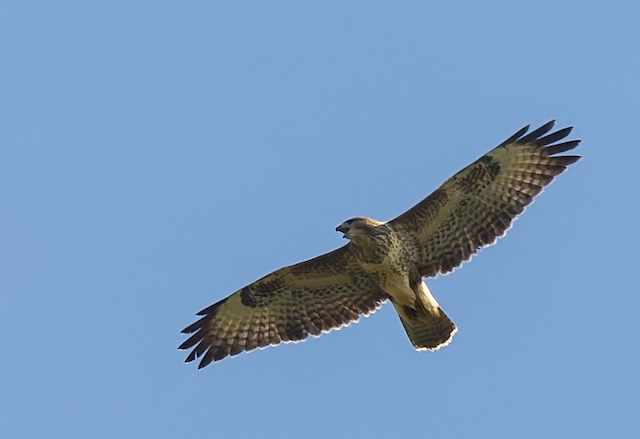 Whilst the Purple Emperor butterfly and Red Kite are the main attractions for me at Fermyn Woods Country Park there is plenty more to be seen. It is one of the places where I pack the longest lens I own (along with extender) and the closest focusing Macro. This way I can have the ability to capture birds at a distance and insects close up.

Although there are only small ponds here, they do attract dragonflies and damselflies. I have spent many a happy hour sat on the grass by the pond enjoying these delicate creatures. I will share a couple of images below but if you love these as much as I do, you might like to check out my dedicated page for more photos of dragonflies and tips for photographing them. 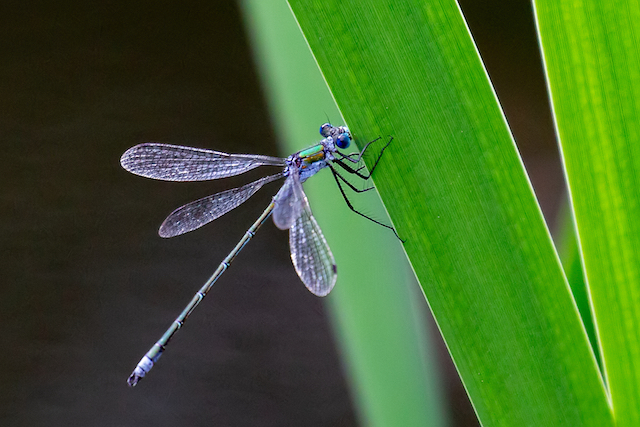 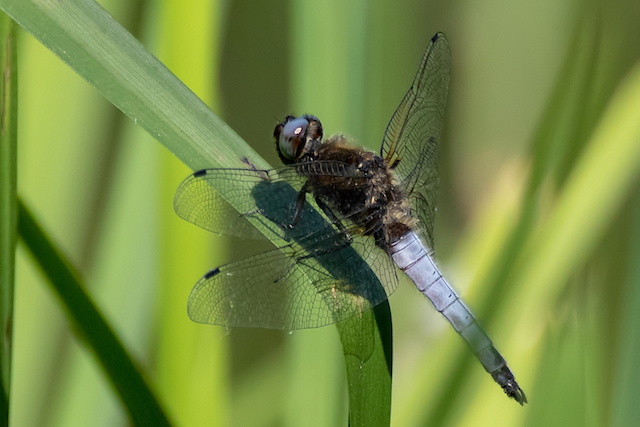 If you set off early in the morning, and walk quietly you might even be lucky enough to find fallow deer in the woods, but we have only seen them once here. 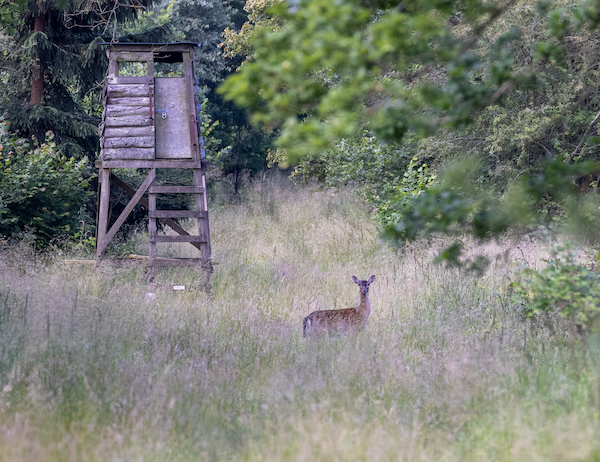 Fallow Deer. She had a fawn but it is not visible in this photograph.

Why not show your love by clicking on the button below?

Have your say about what you just read! Leave me a comment in the box below.