A mute swan attack on an unsuspecting human is not rare. It is wise to give them a wide berth where you can. Especially if they have young cygnets to defend.

However, on a walk around the Heronry Lake at Paxton Pits, Cambridgeshire, in July 2021 we discovered they attack each other! There were two pairs of mute swans on the lake. The male swan of one pair swam much too close to the other swans and ended up paying the price for his mistake.

At first, it seemed like the dominant male was sending a message to the interloper, with much wing flapping and splashing. Being there with my camera, I captured the action as it played out. 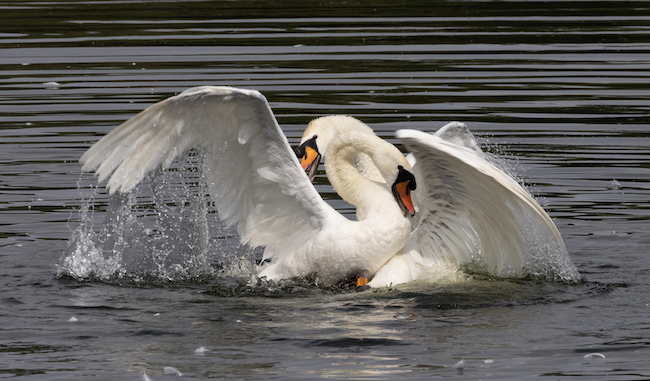 As a wildlife photographer I would never interfere with the natural behaviour of any bird species, and in fact getting any closer to the swans would have been dangerous. It was my job to watch and document the drama as it unfolded. 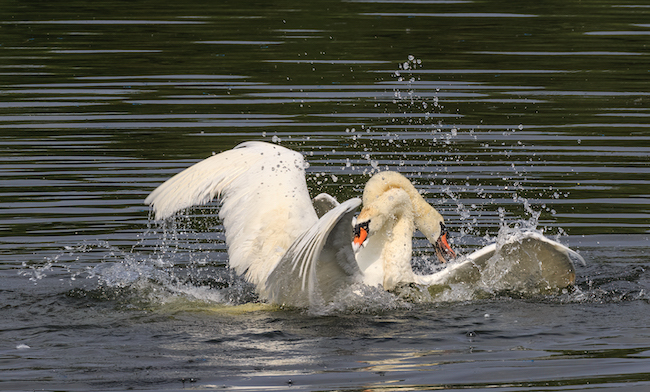 The dominant male's partner had three partly grown cygnets, and this was likely the reason for this mute swan attack. Swans are very protective and territorial.

In the photo below you can see the swan that was tending the cygnets putting herself between her babies and the fighting males. 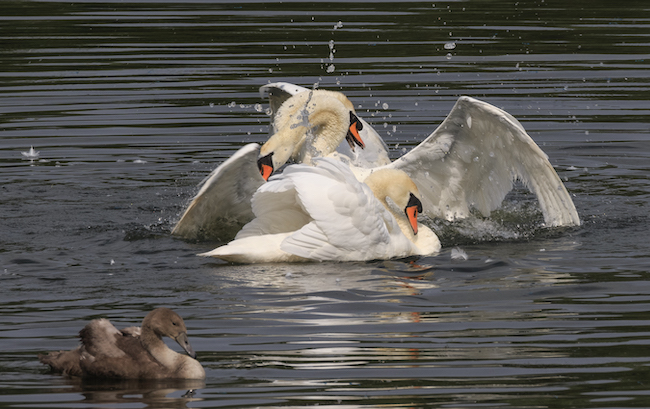 At this point in the event, my husband and I weren't sure if the male swans had gotten tangled and were unable to separate. Their necks were entwined and they were flapping their wings frantically. 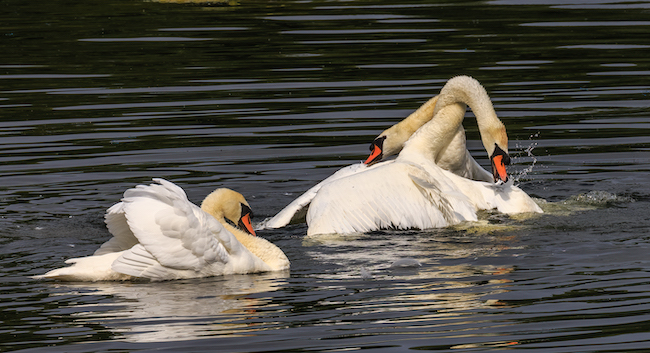 But as they started biting at their opponent's wings, and necks viciously it became obvious that this was a full blown fight! The pen kept guard to keep her cygnets out of the danger zone. Looking at my phone, I realised the swans had been fighting for 20 minutes. 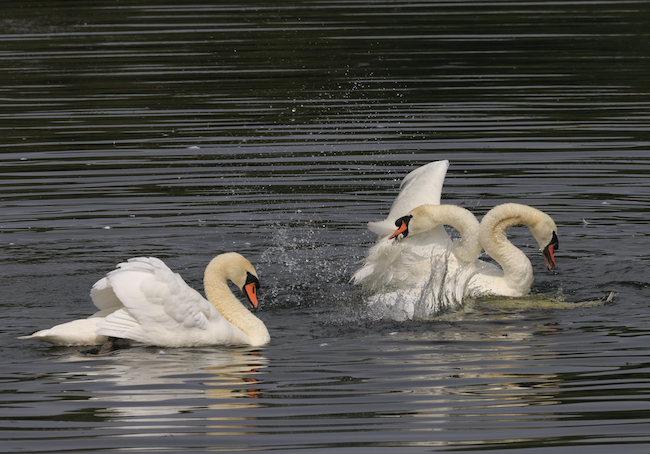 The flapping was slowing down, but they were still entwining and biting each other's necks. 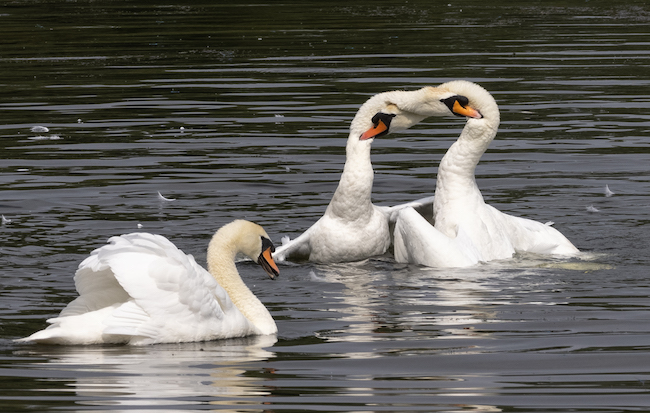 Then one swan broke free and sped off across the lake. The winner chased him, and we thought it was all over, and the loser had been taught a lesson. The sense of relief was immense, but short lived. 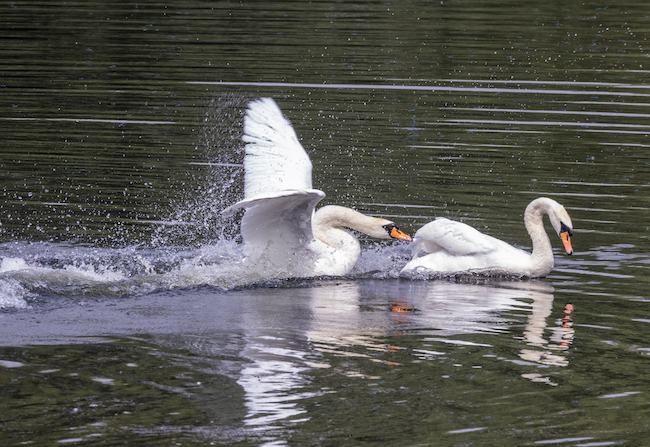 However, the mute swan attack was not over. The stronger bird had let the other put some distance between them. He then launched another attack, rearing out of the water and landing on the back of his opponent, stopping him from escaping. 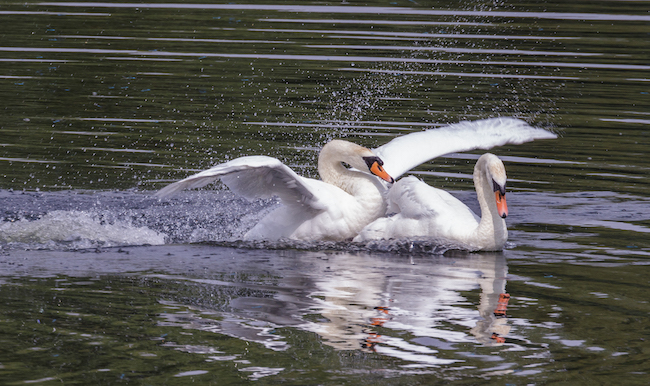 The weight of the swan on top, pushed the other one lower in the water, until only its head and neck were visible. It was obvious by now that this was serious and the intention of the uppermost swan was to drown his opponent!

I found the next photo very emotional to view on the back of the camera, as the female swans look so serene as they watch the vicious fight play out. The sinking swan looked in my direction and it was almost as if I could feel his terror. 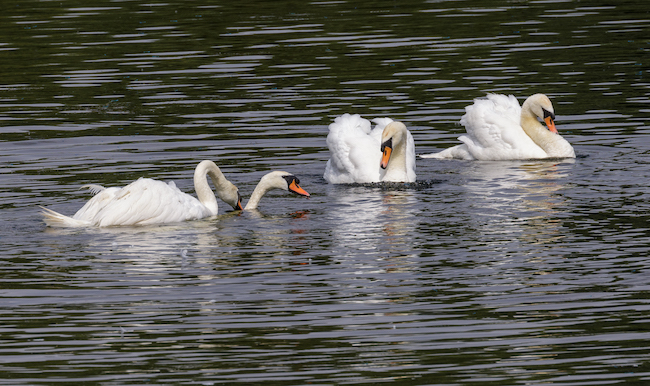 The Common Terns Join In!

As the mute swan attack progressed the birds gradually moved across the lake towards the Common Tern nesting rafts. This met with intense disapproval from the terns, who started to dive bomb the fighting swans. 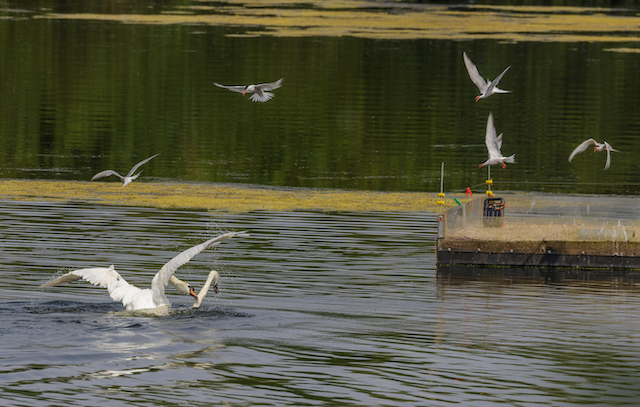 The dominant male was relentless in pinning his enemy under the water, and eventually let go of the neck of the sinking bird. The fight had now lasted for 30 minutes. 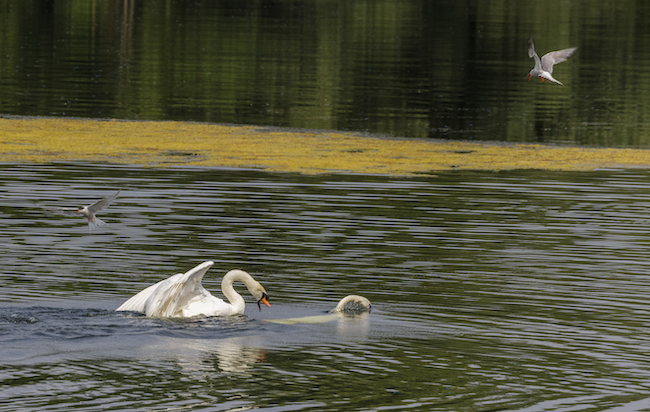 There was still fight left in the sinking swan, and he rallied several times. However, he seemed unable to get out from under the swan on top of him. 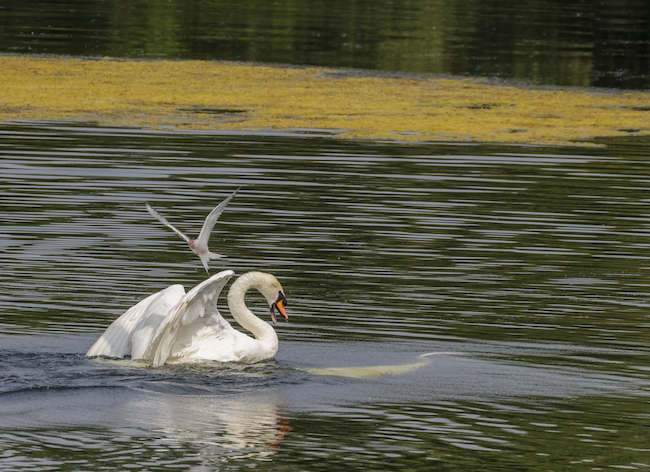 Is it all over?

At this time we had to move on, hoping against hope that he would regain the upper hand (wing?) and make his escape before the inevitable happened. Neither of us wanted to see a dead swan rise to the surface.

Having never witnessed swans kill each other before, I did some research to find out that it does happen occasionally. The saddest part perhaps, is that mute swans are said to mate for life, so there may now be a lonely female on the lake without her partner.

Another place we regularly see mute swan cygnets is Barnwell Country Park, although we haven't seen the adult swans fighting there, thank goodness.