The crest feathers of the Great Crested Grebe were once used to make fancy hats for posh ladies.

These hats were incredibly popular, so more and more grebes were killed for their feathers. The population crashed as a result. There were only 42 pairs left in Britain as the 19th century came to a close!

By that time laws had been passed to stop this practice, allowing the grebe population to recover.

Grebes have adapted to human presence by nesting on floating rafts of sticks and weed in man-made pits left after the excavation of gravel for roads or buildings. This was likely the case at Barnwell Country Park, where I followed a family from courting to independent young birds in 2017..

My camera skills lay in still photography, but I did film this little clip of the precursor to a courtship display. This occurs typically around March to May.

The birds stand tall with most of their bodies out of the water and present their partner with gifts of water weed. Then they dance across the water's surface showing off their colourful plumage.

I would have loved to have seen them do this, but they weren't obliging on the day I visited. 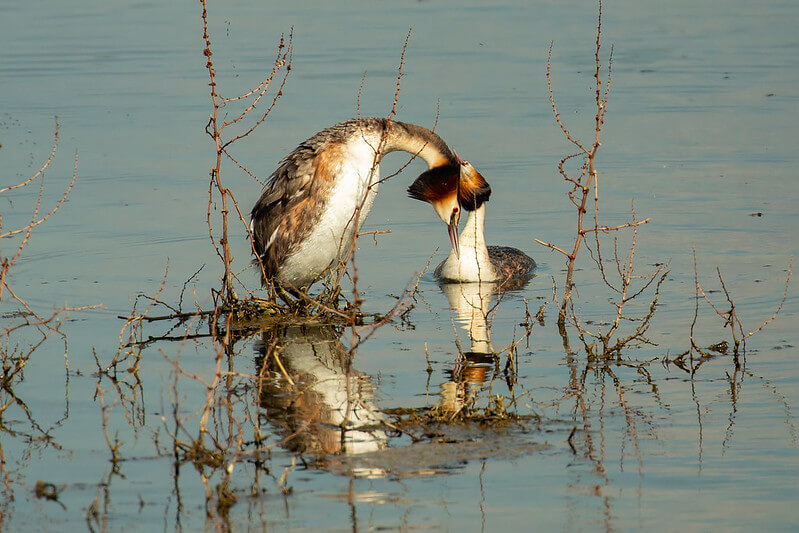 I first spotted them nest building at Barnwell in early June. As they were used to people walking around the park, they were not worried about me pointing a long lens at them. I did, however, find a secluded spot under some trees and observed them from a distance. I counted 5 eggs in the nest.

I was using a 400mm prime lens with a 1.4x extender on my Canon 7D Mark 2. I set up my tripod to keep the camera steady as handholding this combination can be tricky. 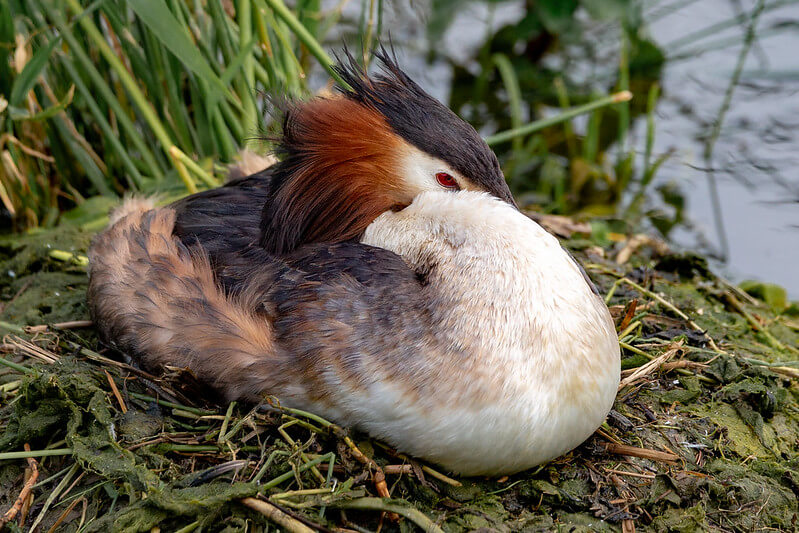 I photographed the bird above at a different location, from a hide, allowing us a much closer view of those beautiful feathers. 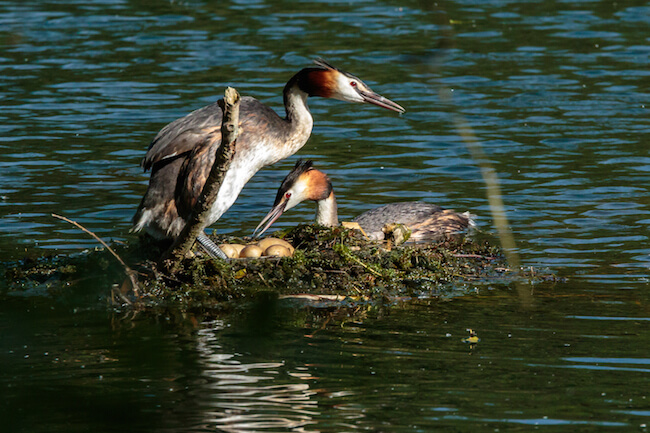 (Cropped) Grebes on nest with eggs

Adult Great Crested Grebe take turns in sitting on the eggs while the other bird goes fishing so I was never sure one was left in charge. 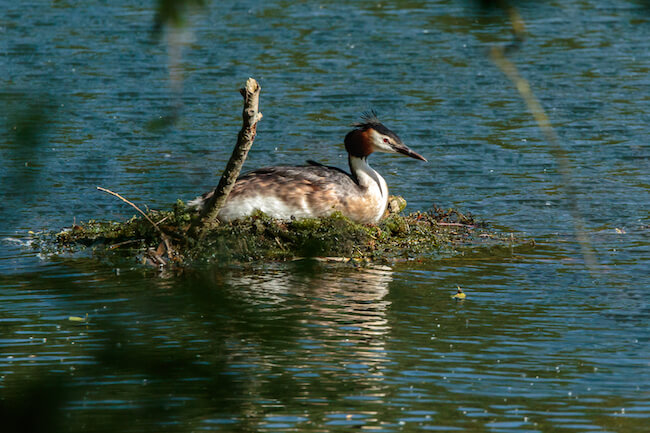 By mid-June, three chicks hatched. The babies settle amongst the parents' feathers for warmth and safety. You can just see their striped heads showing in the photograph below. 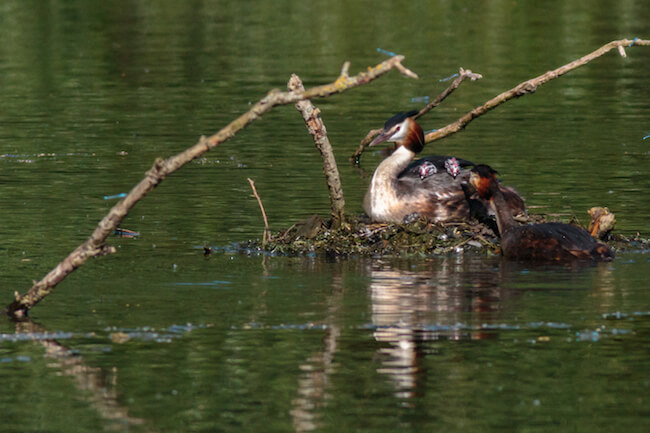 Three tiny babies on mother's back

The parent birds were kept busy fishing and feeding the babies. I stood for hours watching them at work and was lucky enough to see several successful catches. The following photo is an extreme crop (so a little grainy because of the high ISO necessary) showing meal time for one chick. 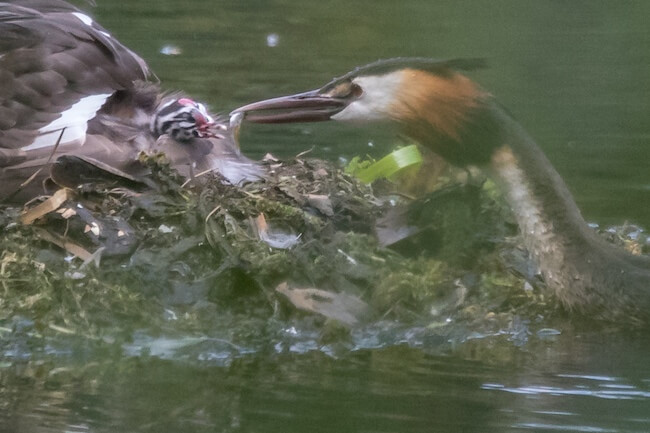 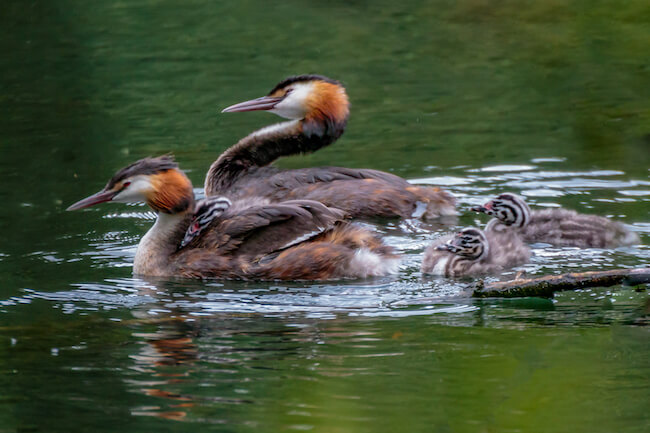 By the end of the month the three babies had taken to the water, although they still hitched a ride when possible.

By mid-July there were only two babies left. Either something ate the other one, or it missed out on food and perished. The adults look after one chick each so it is not uncommon for them to neglect a third and let it starve. Sad, but that is nature. 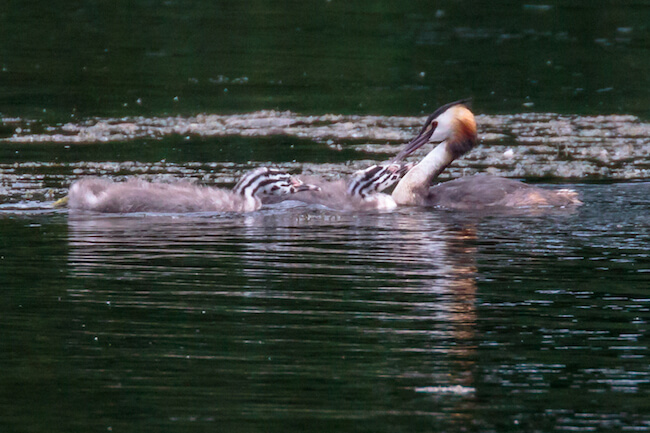 The two remaining chicks flourished. As the days went by, the adults left them while they both went off to fish. This didn't stop the babies from trying to hitch a ride, even if they were too big by now! 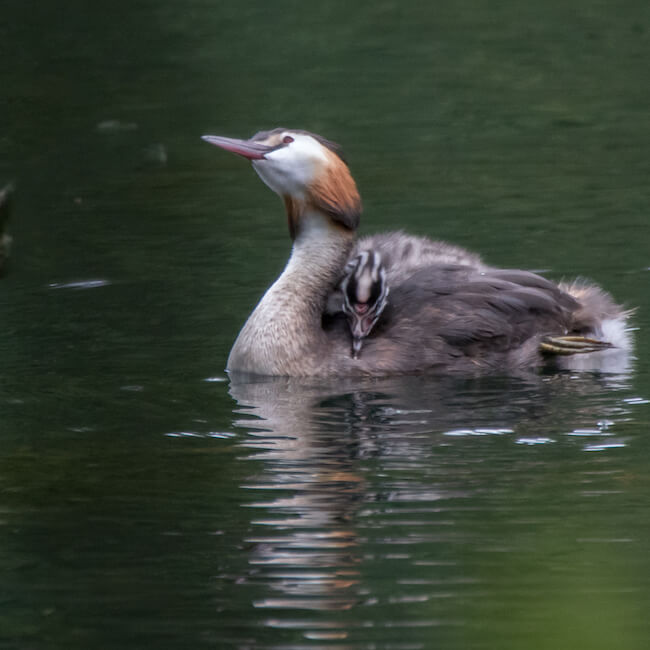 Each time a parent returned, the babies would beg for food, with their little bottoms up in the air and their yellow legs paddling frantically. It was so funny to watch. 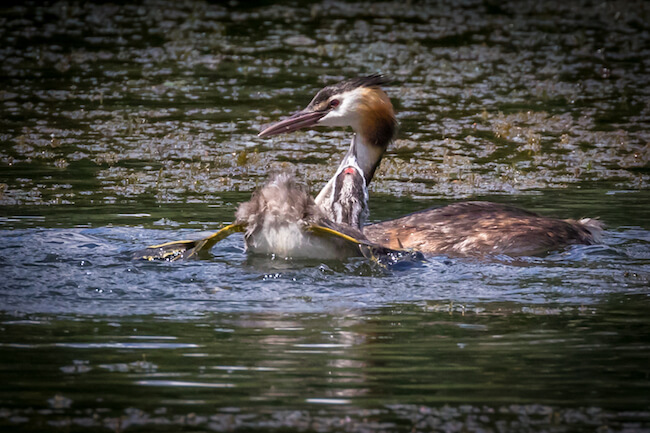 The stripes on their bodies faded, but remained on their heads and necks. 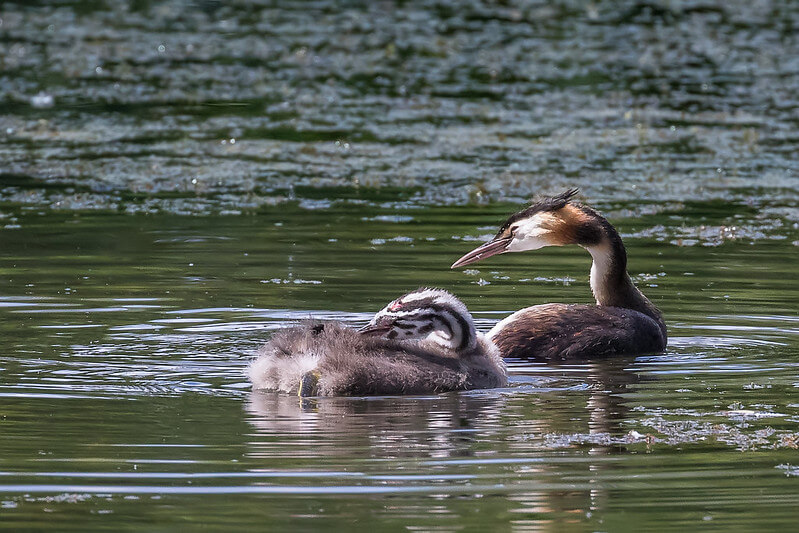 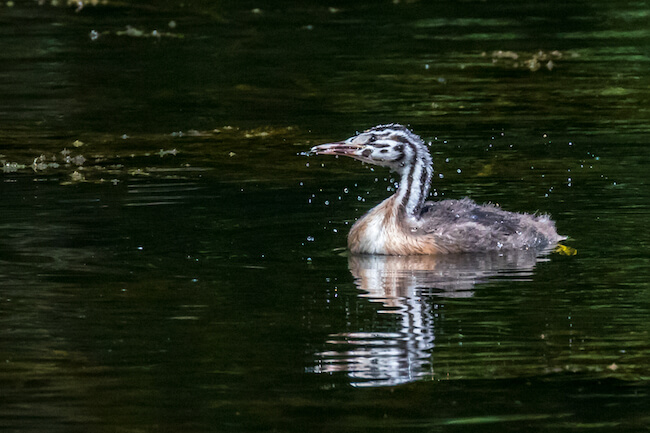 As the Great Crested Grebe matures, it still keeps the striped head for the first winter. I took the following image of one youngster in October 2017. It will be two years before it reaches breeding age. Despite visiting the lakes every year, I haven't seen breeding grebes at Barnwell since. 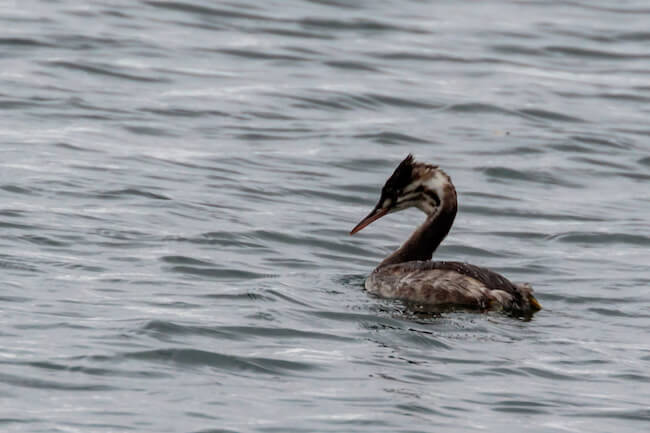