Mute Swans - should you be afraid of them?

When you think about dangerous wildlife that you may meet on walks in the English countryside, mute swans might not be the first creatures that come to mind.

However, they are strongly territorial and if you get too close, an adult may hiss at you, especially if they have young around.

If you encounter one on land, it is best to avoid eye contact and stay calm. Give them a wide berth or turn around and walk back the way you came to avoid confrontation. My husband and I had to do this when we encountered the bird in the photo below, sat right in the middle of the pathway! 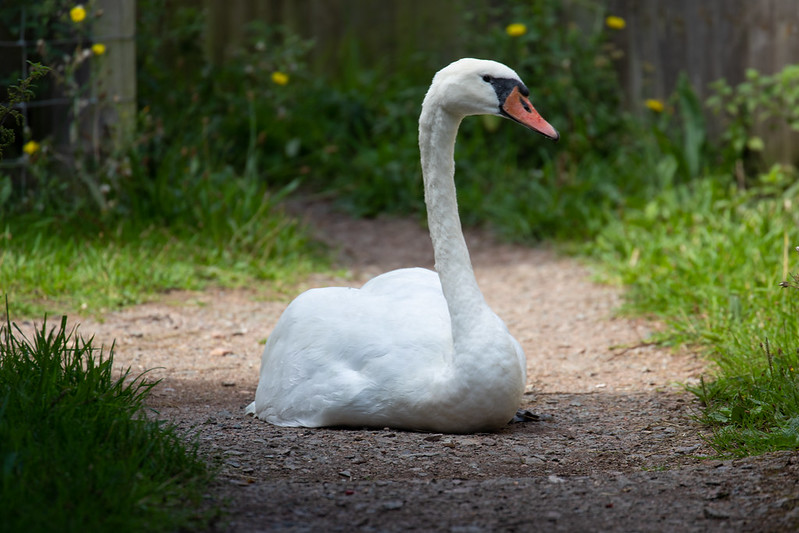 You will not pass, hiss hiss!

Although frightening, an altercation is unlikely to cause anything worse than a bruise to your body or ego, so don't believe stories of swans breaking a human's arm. The bones in their wings are just not large or strong enough to inflict this type of damage.

However, if you cause injury to the bird by fighting back, you risk prosecution under the Wildlife and Countryside Act of 1981.

Swans mate for life and are very protective of their families. The male, or cob, is diligent about keeping other birds away, rushing at them, hissing, with wings half-raised in a threat display. He will even attack and drown swans on occasions!

How can you recognize a mute swan? 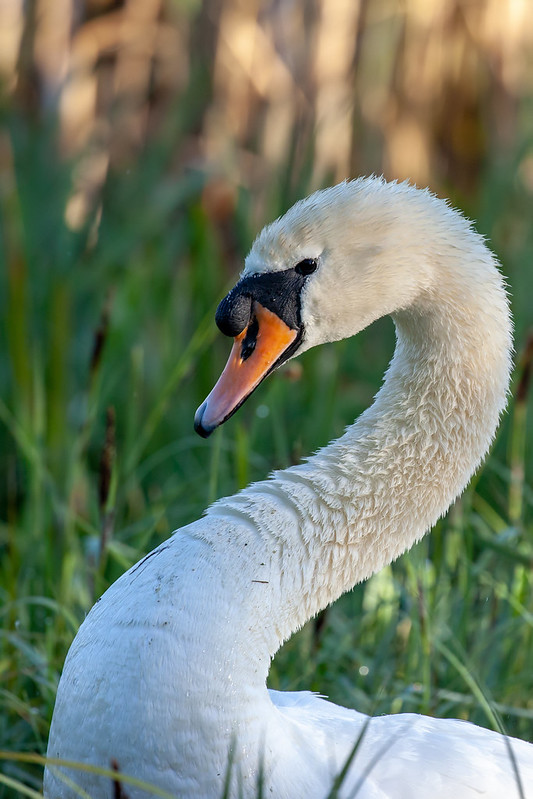 The orange beak and curved neck of an adult mute swan

Mute Swans (Cygnus olor) are large waterfowl, easy to identify from other species by the colour of their beaks and the way they hold their necks.

Adults have showy, white plumage and an orange beak with a black tip. Males have a black knob at the base of the beak. Their legs and feet are also black. They have rounded heads on a long neck normally held in a slightly curved position.

This species is present in the British isles year-round whereas Whooper and Bewick's swans migrate here in the winter months. Both "wild swans" they have yellow and black bills, wedge-shaped heads, and hold their neck extended in a more upright position than the mute.

This species is less vocal than other swans but is not silent.

The mute swan cygnets will let out little peeping sounds to keep in touch with the rest of their family group. The adults will hiss at intruders.

However, you will hear their wing beats when they take flight.

Because they are heavy birds with a wingspan of up to 2.5 metres, getting up in the air is difficult. They run along the surface of the water, flapping their wings for a distance to get airborne. As they climb into the air, you will hear the distinctive and unmistakable whoomp whoomp sound of their wings against the air. If you see flying swans that are honking, they will be Whoopers, as those I videoed at the Ouse Washes below. 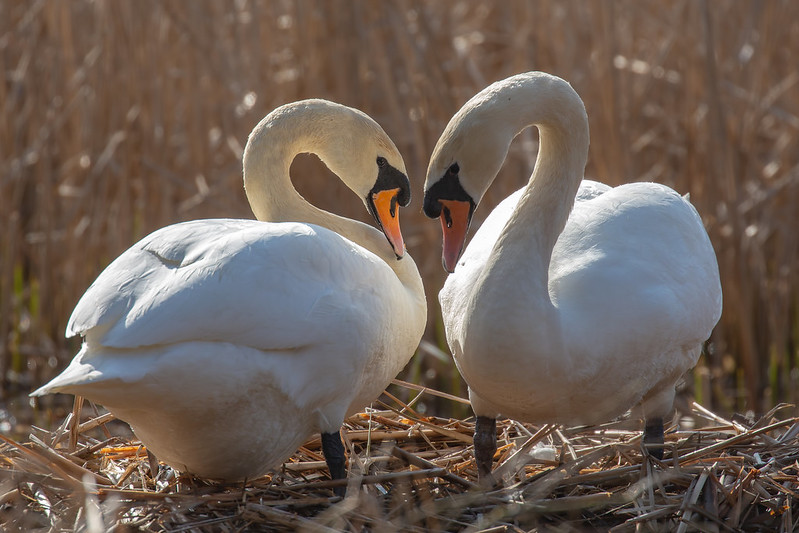 Building the nest at the edge of the lake

A swan will not breed until it is around 4 years old. The female, or pen, will build a nest in shallow water comprising dried reeds and other assorted vegetation collected by the male. She will then lay up to 7 eggs in May or April. The incubation period lasts for up to 40 days and then the cygnets will stay with the parent birds for four to five months. By their first winter, the parent birds will drive the juvenile swan off the nest site.

Although they have a conservation status of least concern, it is still illegal to disturb them when sitting on their eggs.

Mute swan cygnets start life with pale grey down, which turn to brown fluff, before eventually becoming white like the adult plumage. When they hatch, they have a grey bill, which turns pinkish before ending up the rich orange of the adult birds.

While tiny, the cygnets will sometimes hitch a lift on the parent's back to save energy, which is a lovely sight to see. 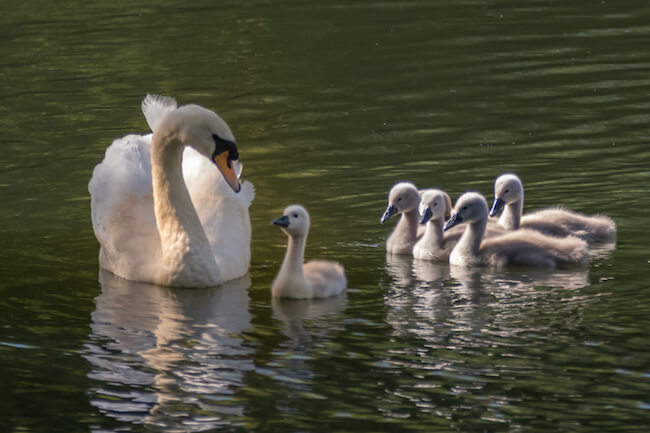 Teaching the cygnets the rules

How long do mute swans live?

An adult mute swan has a lifespan of around 10 years in the wild. It is possible to discover the age of a swan if it is ringed while young. These rings show the year it was born along with where. One ringed wild bird was 15 years old along I have read that the oldest mute swan lived for 28 years!

Direct threats include foxes and pet dogs which can attack them on land. However, they are more in danger from us humans.

Sadly, despite the law, vandals can deliberately abuse these beautiful birds and cause them injury or even death - a punishable crime. 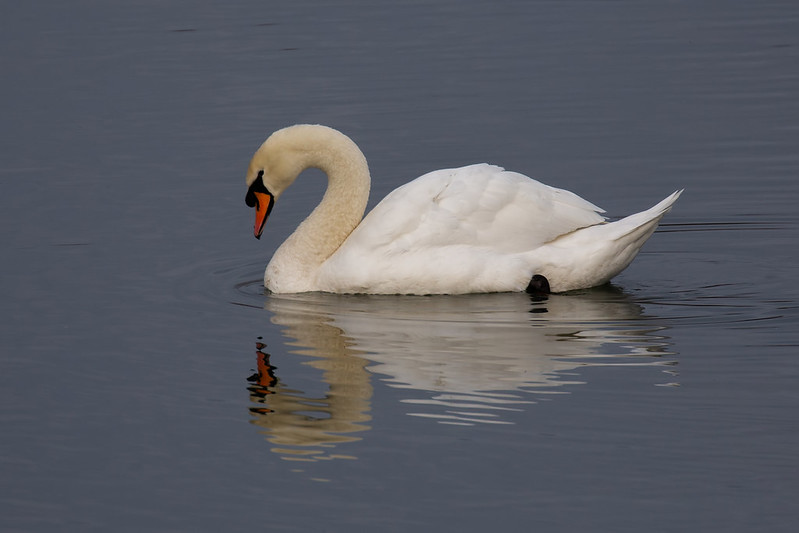 Where do swans live?

Mute swan numbers are higher in England and Ireland than in Scotland and Wales. You will normally find them near lakes, slow-flowing rivers, canals, and even some coastal areas. They also like to graze on arable land or in grassy fields.

Although territorial, you can often find groups feeding in the same area, especially during the winter six-week moult. This is the period when they grow new feathers and are effectively flightless. There is safety in numbers, so they sometimes gather in vast flocks called colonies. One local area where this happens is at the Welney Wildlife and Wetlands Trust in Norfolk, where wardens feed them daily throughout the winter, drawing sizeable crowds of birdwatchers.

Famous colonies gather at Abbotsbury in Dorset, and Berwick-upon-Tweed in the North of England. 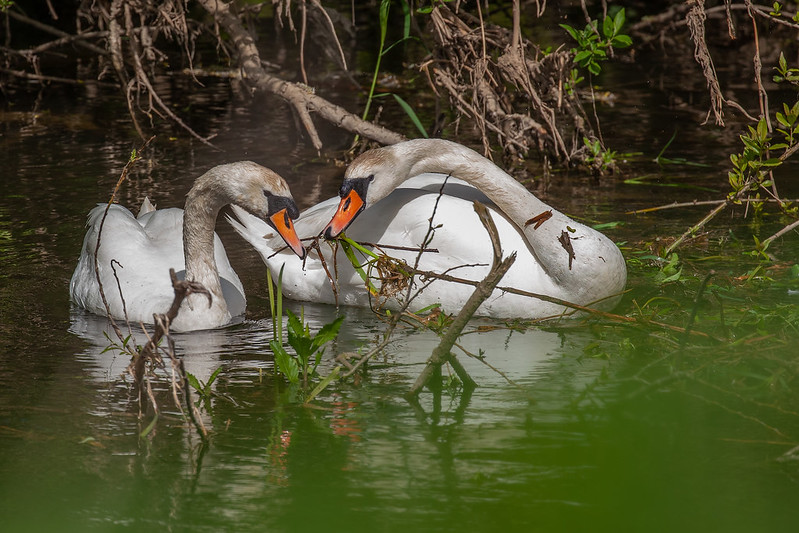 Courting behaviour on the river at Thrapston

What do mute swans eat?

The natural diet comprises submerged aquatic vegetation, which the swan reaches by thrusting their long necks under the water. They will also graze on short grass.

There has been debate over whether we should feed them bread. At first white bread was considered bad for them, and we were told to give them wholemeal only. Then we were told not to give them bread at all. However, when swans began starving, it was decided that bread is better than nothing.

Another argument against feeding bread to swans in the park was that it causes angel wing, but there is no proof that this is the case.

Angel wing is a deformity where the wing feathers do not form properly in cygnets, resulting in the wing not sitting in the correct position. Although not painful for the bird it means that it won't be able to fly, leaving it vulnerable to predators.

A cygnet crossing the path in front of me

This is a tradition that has survived from medieval times, where nobles would mark the beaks of the swans they owned. They often served them at banquets and considered them an important food source.

No longer are the birds eaten or marked in this fashion, but this annual event taking place on the Thames in July serves to check on the health of the Queen's flock. The Queen's Swan Marker has the job of counting the cygnets, as well as weighing and measuring them while checking for signs of disease. They are then ringed by the Queen's Swan Warden.

There seems to be an irresistible urge for many to photograph swans when they see them. After all who can resist their beauty? However, it can be more tricky than you might think to get great photos of swans. There are three main problems...

If it is safe to do so, try to get down lower so your eye line is level with theirs, to get better photos. 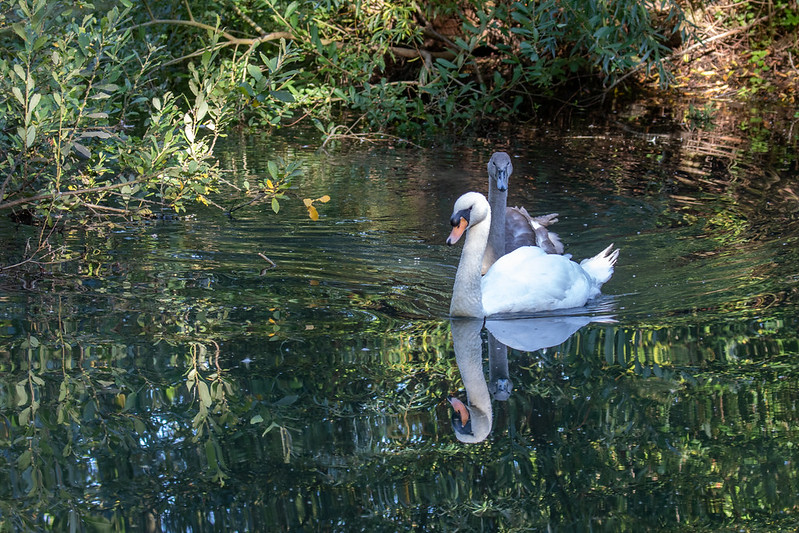 The camera overexposed the white bird

If you include plenty of background, your camera's automatic exposure will cope well. This is because there is a balance of bright and darker elements within the frame. But move in closer and all it will see is the white and it will compensate for this by darkening the picture.

This is because the sensor turns everything in the frame to a neutral 50% grey tone and exposes for that, resulting in a dirty-looking subject. If your camera settings are adjustable, try dialing in a little negative exposure compensation to correct this. You should then end up with a bird that retains some detail in the white feathers.

To avoid harsh shadows try taking your pictures earlier or later in the day. The sun won't be overhead and shadows will be softer. Or go out on an overcast or misty day for really atmospheric shots. I took the following photograph early on a very misty day, and oozes atmosphere. 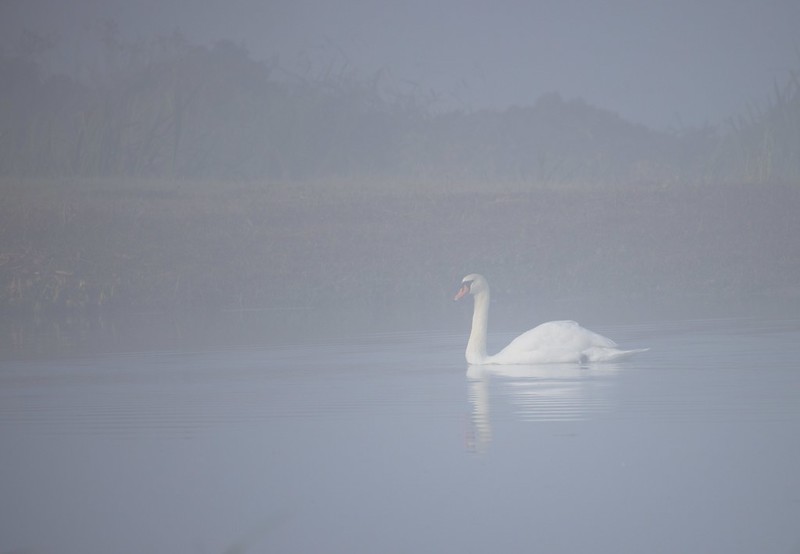 Other swans you will find in the UK

Mute swans are not the only swan species in the UK, but they are the most common and normally the only ones that are resident all year.

The Whooper Swan (Cygnus cygnus) is similar in size to the mute swan but with a straighter, more upright neck. They migrate to feeding grounds in the winter from Iceland. Their beaks are mainly yellow with black at the tip. 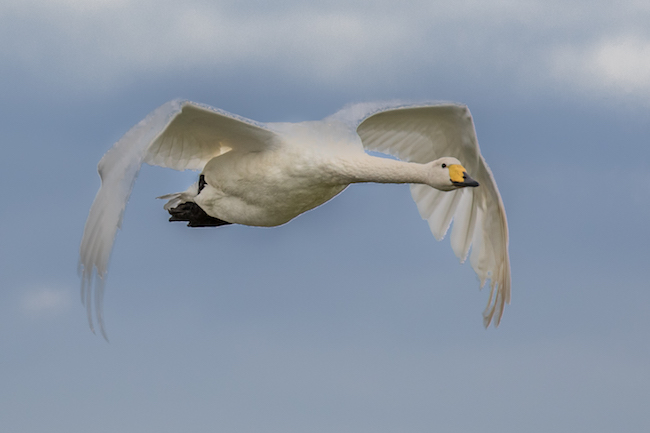 The Bewick's Swan (Cygnus bewickii) is much rarer, with only around 2,000-3,000 birds wintering in the UK, a number which is sadly declining. So much so that the Birds of Conservation Concern added them to the red list for birds in 2021. They are smaller than Whooper Swans, and again have yellow and black bills but with a smaller amount of yellow.

Although not native nor a migrant, you may see Black Swans in Dawlish, Devon. This town is famous for these birds which have been there since the early 1900s. Although wild, the Dawlish Town Council manages them, along with other waterfowl.

Black swan cygnets remind me of the fairy tale ugly duckling, with their fuzzy grey feathers! The young swans do not have the striking red beak with a white stripe that their parents sport.

I have seen all but Bewick's in the wild, and it is always a special experience. If you get the chance to see any of these graceful creatures, take it! You won’t be disappointed. 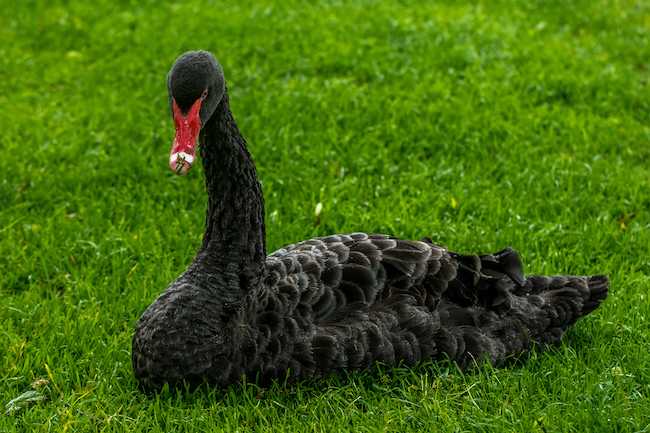